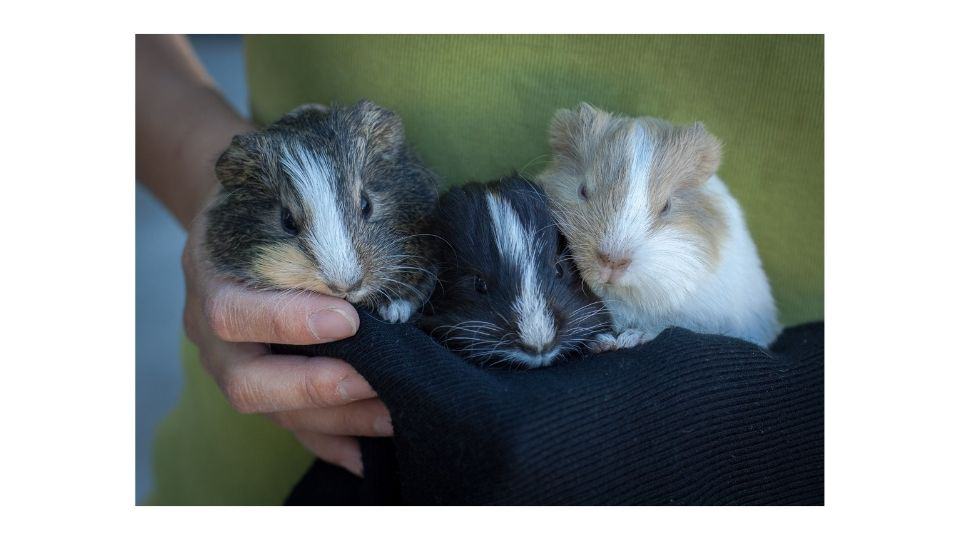 The oestrus cycle of female guinea pigs is 13 to 19 days, the readiness for conception around ten hours; ovulation only takes place after the female and male goat copulation, which lasts only a few seconds and therefore often goes unnoticed. The gestation period for guinea pigs is around ten weeks at 62 to 72 days.

From the third to fourth week of pregnancy, you can feel the offspring in the form of small balls on the mother’s stomach.

In the seventh week, this begins to bulge, at the same time there is also a development spurt of the young animals. The expectant guinea pig should not be separated from the rest as this will only make it stressed. These are fully developed at birth and are one-tenth the weight of their mother.

The latter increases – depending on the size of the litter – by up to 50 percent. If you find that your guinea pig is pregnant you should avoid any stress.

This also includes changing the diet of the animal. By giving fresh food such as meadow herbs, you cover the increased need for proteins and vitamin C during pregnancy. The expectant guinea pig should not be separated from the rest as this will only make it stressed and this is not good at all especially during pregnancy.

The familiar environment in his group contributes to a stress-free birth of your guinea pig. Females show no signs of nest-building behavior; however, since they give birth while sitting, a “trial sitting” can often be observed in several places.

On the other hand, if a guinea pig lies on its side during labor, this can indicate an illness or complications. The pubic symphysis opens a few days before the birth and you can feel the ends of the bones of the pubic bone.

When the opening is a finger’s width, the birth is imminent. Until labor begins, the female eats and moves as usual within the group.

The birth of a guinea pig is usually straightforward and takes a few minutes per cub; around ten minutes elapse between births. On average, a litter consists of two to three young animals. These are born head first, with the mother helping this process by pulling them out.

The other group members withdraw in the meantime and often help the mother with rearing and care afterward. After each birth, the female eats the membranes, the afterbirth, and often the bloody litter.

She cleans her offspring, who are usually on their feet right away and cuddle up to their siblings.

Do guinea pigs eat their babies?

yes, they do if there is a food shortage during birth. It is therefore advised to provide enough food for the guinea pig during pregnancy and birth to avoid such occurrences.

Guinea pigs: the offspring are here

Weigh the kittens daily, preferably at the same time, to check their development. During the first three days of life, the little ones lose up to ten percent of their birth weight because the mother only begins to produce milk after the afterbirths have been eaten.

If the weight loss is higher or if you notice significant differences in size between the young animals, additional feeding is necessary.

See also  Why does my dog howl when I howl

Abundant vitamin-rich fresh food provides the female with the nutrients it needs for milk production. A special rearing feed for the young is not necessary with normal development.

Examine the guinea pig and its offspring for injuries after birth; the rest of the umbilical cord dries and falls off on its own. Female guinea pigs return to heat immediately after birth. For health reasons, we strongly advise against mating at this early stage.

The sexual organs of the young animals are easy to see so that you can distinguish between female and male animals and separate them after four weeks.

If you are considering early castration, it should be carried out between the third and fourth week of the life of the male lugs with a weight of 200 to 250 grams.

Female offspring and neutered goats stay with their mother and her group for six to eight weeks. Maintaining this time is important for the development of social behavior and the immune system. In addition, guinea pigs eat their babies if they lack enough food after delivery.