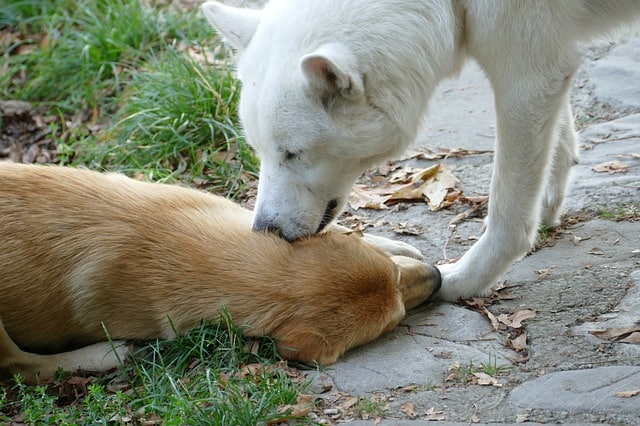 It sounds a bit gross when you think of it in human terms, but it is actually a natural thing that dogs do when they encounter their friends. Some dog owners find it a bit disconcerting, whether their dog is the receiver or the giver of the licks. Don’t worry, licking the face of a friend is very natural and can happen to any dog.

Why Do They Lick?

So, why do dogs lick other dogs’ eyes or face? Two of the main reason for this action are it is a sign of deference or a wish to groom his friend.

When we talk about deference, this means the dog doing the licking is trying to appease the receiver of his action. In a household with more than one dog, there is always a so-called leader among the dogs.

The other dog or packmates of this leader often try to lick and show deference to their leader by licking his muzzle, eyes, or ears.

During introductions, some dogs take the initiative to lick the other dog’s eyes, ears, and face as a sign of respect and deference.

Dogs can sense the aura of other dogs and can easily assess whether their new friend is a leader or not. Not to worry, though, once their hierarchy has been established through the initial introduction, they will usually fall into place and play.

If both dogs are leader quality, some assessing between themselves might take place and then the hierarchy will be followed. Dogs usually play very well with others if they are properly socialized.

See also  Can Dogs Eat Egg Shells? (What Will Happen)

Licking as a wish to groom his friend is also another valid reason for licking his friend’s eyes, muzzle, or ears.

Dogs can be fastidious ( I know it’s hard to believe sometimes when they get so dirty while out in the yard!!,) and one of the parts of their bodies that they cannot lick themselves are their eyes and ears.

A good dog is always willing to groom his doggy friend. Mutual grooming is a way for dogs to bond and strengthen their relationship. You might notice that friendly dogs also scratch or nibble on each other when they have the time.

In connection to grooming, the receiving end of the licks might also have an issue with his eyes. Dogs can easily sense if their friend or another dog has a wound or an injury.

Dogs cannot reach their eyes to lick themselves and other dogs are more than willing to clean up their eyes for them. Wounds in other reachable parts of the body are usually licked endlessly by the injured dogs.

Veterinarians have explained that dogs’ saliva can help against particular bacteria but this does not mean that you should just leave any wound for him to heal by himself. Modern medicine has surely surpassed any bactericidal effect that dogs’ saliva has.

When you are wondering, why do dogs lick other dogs eyes; the abovementioned reasons can be a good basis for your reaction.

If you see it as a sign of respect or deference, assess whether the receiver is a bit disgruntled and wishes to show dominance.

See also  When Does Puppy Energy Go Away

Some dogs react to face licking aggressively and might try to actually show dominance. Although this kind of scenario does not happen often, the possibility is not zero, so it is best to be watchful when introducing dogs.

Do not be so tense, though, because dogs can sense if their owner is feeling wary and might take a hint from you. Grooming is a very good way for dogs to bond and you should not hinder this for either dog.

It shows the affection that they have for one another and you as well, which is why dogs also love to lick our faces. Not all humans like being licked or getting the attention of a dog.

Try to control the exuberance of your dog if it is used to licking other dogs since he might try to lick other people also.

Licking other dog’s eyes can also happen out of the blue. If this is a new behavior between old friends, you might want to check the receiver’s eyes.

Sometimes, dogs are sensitive to their buddies’ issues and might actually be trying to heal a scratch, wound, or tumor near or around the eyes.

Excessive tearing can also be the cause of licking. Have the other dog’s eyes or surrounding area checked just to be on the safe side. Try to observe if your dog is only licking the eyes of the other dog. This is a sure sign that there may be something going on with the eyes