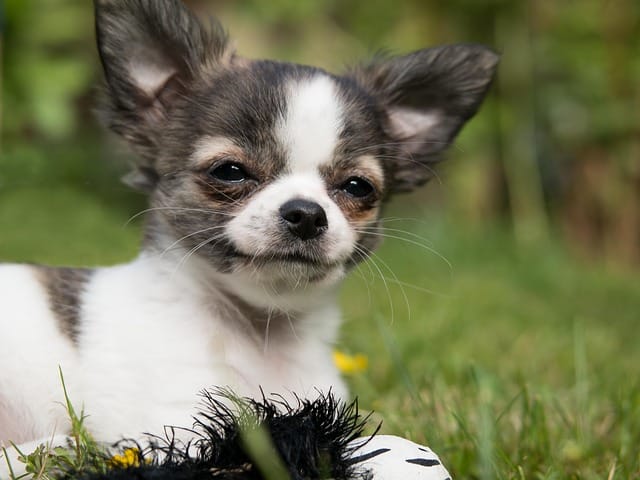 The famous Chihuahua dogs are originally from Mexico, and their main characteristic and attraction is their tiny size. It is an intelligent, tenacious, and courageous breed that has earned many people’s appreciation, captivating their hearts because of its charisma.

However, some of us have had the opportunity to meet the odd Chihuahua that all he wanted to do was bite and fight with others, and of course, we will have wondered why are Chihuahuas so angry? Keep reading, and you will clarify your doubts

This is due to a phenomenon known as “small dog syndrome.” Smaller breeds, such as Chihuahuas, are sometimes noisy, growl a lot, and are even aggressive enough to bite.

Chihuahuas have a sassy and headstrong personality, and despite their size, they don’t willingly back down in a fight. But this is not to say that small breeds are not doomed to be aggressive.

Your Chihuahua’s aggressive behavior may not be in its nature, but rather a result of the way it responds to it. This breed tends to be more reactive and perceive the environment as more threatening than it really is.

Another important factor is the relationship that is established between the family and the dog. Generally, owners treat large dogs with different rules and expectations than small dogs.

Depending on how you train your Chihuahuas, it could display different behaviors. On the one hand, he can be affectionate, playful, and whimsical

See also  Why Does My Dog Keep Stretching? [7 reasons]

. On the other hand, it can become a nervous dog and show aggressiveness or dominance when it is very spoiled, a mistake that we easily make because we get carried away by its “fragility.”

But this pet can become the ideal companion if we learn more about its character and educate it correctly from a young age.

On the other hand, if we pamper it a lot and do not apply the necessary rules, we will be creating a disobedient and capricious dog, and consequently aggressive.

How Can I Correct Mean and Angry Behavior in Chihuahuas?

Set rules for your Chihuahua to assert its position as a pack leader (remember that you don’t need to be mean or rude to be the alpha). Think of the rules that suit your needs. For example

If your Chihuahua growls and barks at strangers entering your home, don’t pick it up and pet it. Don’t let it sit on your lap while it grows at your visitors.

It should have special privileges only if he is calm and friendly. When your Chihuahua is aggressive, take it out of the room. Put it in its box until your visitors leave or until it has calmed down. Put it on the ground if it insists on growling

Every time you have visitors or your Chihuahua is exposed to other situations that trigger its aggression, reward it if it remains calm and friendly.

Try to interrupt its aggression with the words “no” or “stop it.” If it stops growling enough to turn toward you, reward it.

Establish longer and longer periods of calm before rewarding your dog. Allow it to be in the room or on your lap while it is quiet. When you reward your Chihuahua for being friendly rather than aggressive, you reinforce the behavior you want it to display.

Due to the small size of a Chihuahua, many think that obedience training is not necessary. This is a severe error. Teaching a chihuahua’s basic obedience commands will help you maintain your position as a pack leader and give you a way to control your Chihuahua’s behavior.

You should teach your Chihuahua the basic commands like sit, lower, come, and stay. Use positive reinforcement to train your Chihuahua, rewarding it for obeying each command correctly. Chihuahuas are smart and fast learners, do not punish your Chihuahua, or it may make its aggression worse.

It is essential to socialize your Chihuahua with other dogs, animals, adults, and children. You should start socializing when your pet is a puppy.

If you don’t socialize with your Chihuahua, it may panic and act aggressively when hit encounters unfamiliar people or animals. So, start socializing your dog as soon as you get her home.

Take your Chihuahua to the parks and introduce them to as many people and animals as possible. Now that you know how to avoid aggressive behavior in your Chihuahua, nothing better than a quiet time with your best friend!

See also  Is It Normal For A Puppy To Have A Big Belly?