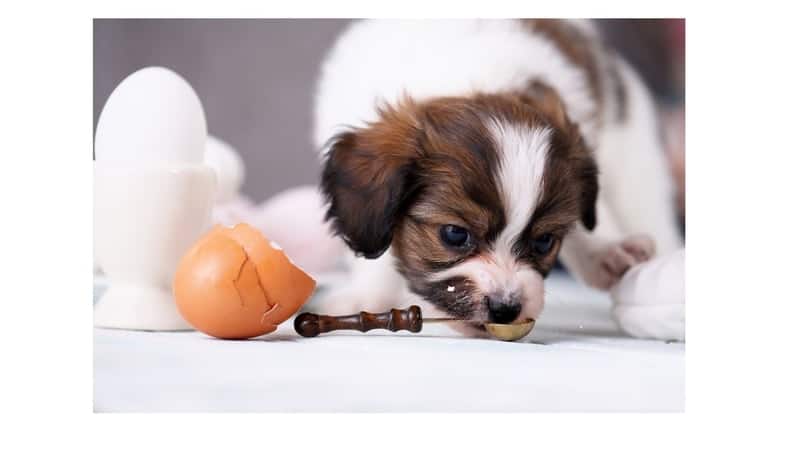 You’ve heard of the benefits of dogs eating eggs but can dogs eat egg shells? Are there any benefits to it or is it even safe for them to so?  This article will answer all that and more so read on.

Dogs definitely can eat egg shells and they are safe to eat. A few precautions have to be taken as to the type of eggs you give them. Organic eggs are usually best because they are not cleaned using chemicals which may be harmful to your pooch.

Egg shells are rich in calcium and can be given to dogs raw or can be ground into a powder that can be sprinkled over dog food.

The Benefits of Egg Shells

If you Google or look through YouTube, you will find various resources online that show you the great benefits associated with egg shells.

They are loaded with calcium which our canine friends need a lot of. Egg shells can be eaten fresh off raw eggs or prepared into a powder that you can mix with your regular dog food to give them that calcium boost that they so need.

It’s essential for the heart to function optimally as well as ensuring that the bones and teeth are strong among other things.

There are many debates online where people talk about whether it’s best to give your dog whole raw eggs with shells or to boil them first then give them to your dog. From what I’ve observed, there really aren’t that many pros and cons of one method other that gives it a significant advantage.

I think the best bet is to try both options with your dog and see which one they prefer. I have also seen debates on whether to feed your dog only the egg whites and not the yolks but there is no danger in feeding your dog the whole egg that I am aware of.

In fact, I recommend it. One thing that you need to be mindful of as far as giving your dog an egg is concerned is that you have to clean them first, which leads me to my next point. 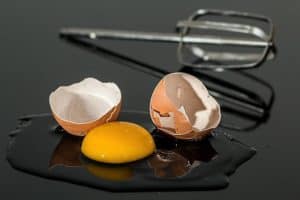 Before giving your dog a raw egg, you need to know whether they are organic, farm produced eggs or they are from a large scale producer.

The reason you would want to know this is that large scale producers clean their eggs and in doing so they use chemicals.

You don’t know what effect these chemicals may have on your dog so it’s best to tread carefully. Eggs that are branded organic, on the other hand, are cleaned using water.

You can go one better and go straight to the source and buy from an organic producer. Bear n mind that you’ll find a few with chicken poop on them but then you can clean them yourself with the knowledge that no harmful chemicals were used in the cleaning process.

Mass produced or eggs from genetically modified chickens can have other subtler side effects of which you will only see the full impact months or maybe years into the future. That is why I advocate going organic all the way.

Do You Have to Grind Egg Shells For Dogs?

Now for the question of whether or not you should grind egg shells before giving them to dogs. There are a number of ways that your dog can ingest egg shells.

The easiest way is to just give them a whole egg and let them crack and eat it themselves. Another way is to mix it with their food (We’ll get into that in more detail later) and have them eat the egg shells as part of their meal.

Another common way is to grind the egg shells into a powder that you sprinkle over their food. You can make this powder at home if you have a coffee grinder or food processor.

Here is how to do it:

The first step is to get as many egg shells as you can find and put them in a pot then boil them for a few minutes. You do this in order to kill off any germs that may be on them.

You are most likely not going to find a large supply of egg shells in one go but will collect them over time as you regularly cook them as a regular part of your meal.

During the time you are collecting them, they may get exposed to bacteria so you need to make sure to boil them so that they are free of any bacteria that might have collected on them over the course of time.

Step 2: Bake Them until Crisp

Next, bake them in an oven at a high temperature until they are crisp. You want to have them with a nice and crisp texture so that they are easier to grind into powder.

Finally, put the egg shells in either a coffee grinder or food processor then grind them into a fine powder. You can grind them into different levels of coarseness but the finer it is the better if you are doing it for young pups.

Mix this powder with their food on a regular basis to give them that calcium boost that they need to grow and maintain their vital functions.

As stated earlier, a great way to give your dog the full benefits of not only the shell but the full egg, is to crack a raw egg over dog food them crushing and sprinkling the egg shell over the food. A lot of dog owners do this and it’s a great way to get dogs to eat if they were otherwise not keen to do so.

See also  Why Does My Dog Keep Stretching? [7 reasons]

There’s been some debate for quite some time now regarding the benefits or down sides of egg yolks.

Some say that you should only feed your dog the egg white and not the yolk but I am here to tell you that the yolk of an egg is beneficial for your dog and taking it out will be doing your dog a disservice.

Eggs yolks contain Vitamin A, D, K, E, B13, Folate and Omega 3 fats. These offer multiple benefits for your dog including better brain function and immunity boost among many others.

How Many Eggs Can a Dog Eat in a Day?

It is recommended that you feed your dog not more than egg per day and between one to three eggs per week. If you have a pup or smaller dog, stick to a maximum of two per week and for bigger dogs, you can do three or four.

Conclusion on can dogs eat eggshells

So, can dogs eat egg shells? The answer to that is definitely. There are a lot of benefits that a dog can get from eating eggshells.

You can give them a raw egg and let them break it open on their own and eat the insides and shell or, you can process the shell into a powder which you sprinkle over their food. Either way, egg shells are great for your dog.