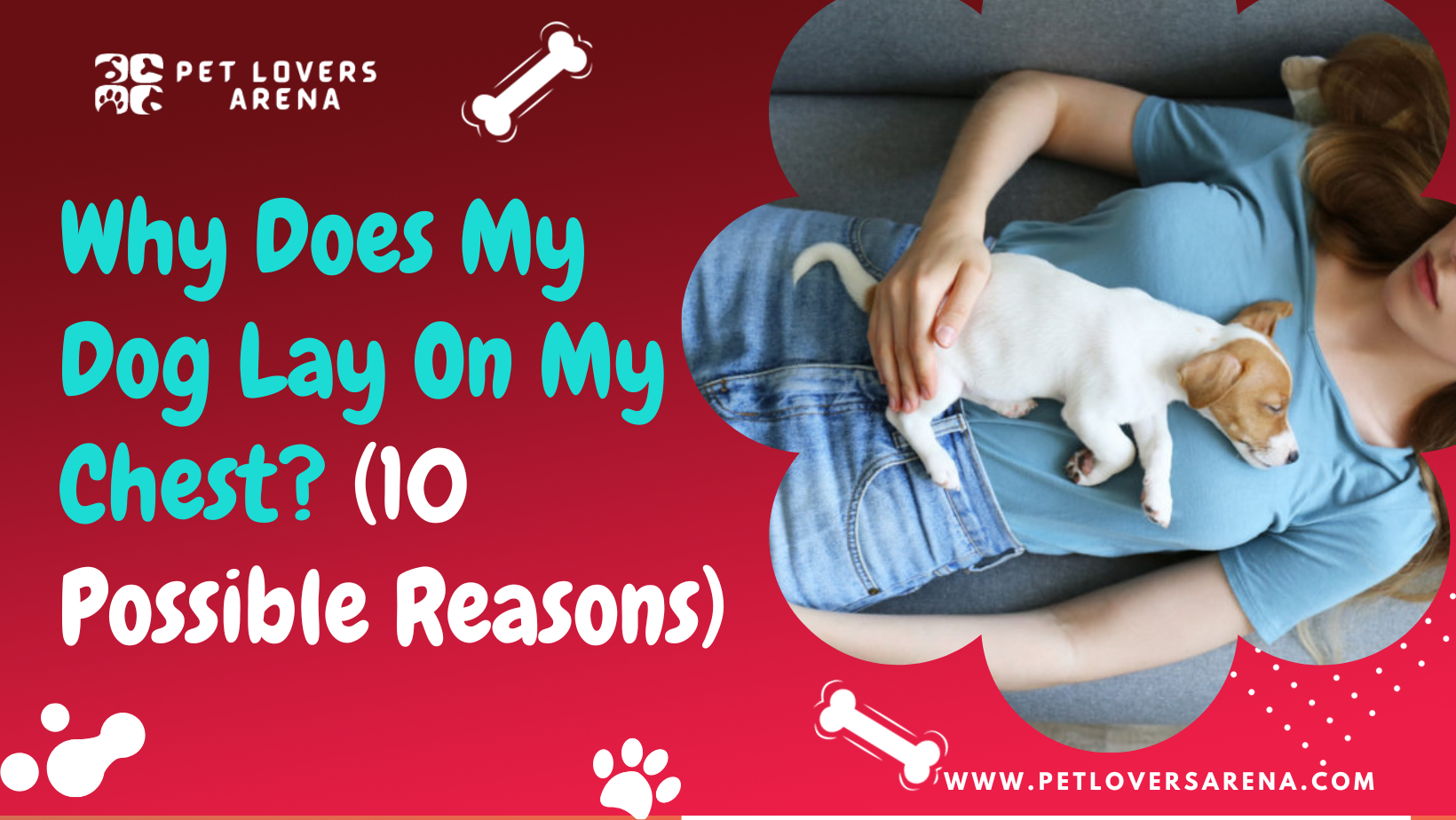 After a hectic day’s work, all you want is a cozy bed and a deep sleep, and nobody around you to disturb. But then, you suddenly find your pet buddy jumping on you and lay on your chest, and you find this pretty buggy. So, what do you do now.

Meanwhile, your doggo, too, has been longing for you the whole day, and he can’t keep waiting for you to cuddle him. However, you need to find a way out, so that you can keep away with your pet buddy away from you, sometimes.

There is a genuine bond of affection between you and them. Laying on your chest while in bed and then staring at your face, in most cases, is what it looks like: a sign of affection. When they are on your chest, they are as close to your face as they ever get during the day, and because they are pack animals, they long for that connection.

A dog laying on your chest is often construed as a show of affection by most people. However, there can be several other reasons. Let’s dig a little deeper into this.

Following are some of the reasons why your dog might want to lay across your chest:

There can be several reasons for a dog to feel anxious. For instance, the bursting of firecrackers nearby is likely to cause panic. The dog cannot understand the cause of all the commotion, and hence it becomes extremely nervous. In this situation, the dog will try to seek comfort from you. By lying on your chest, it will release calming hormones.

There are other reasons for a dog to become anxious, too. For instance, it might once have been a stray before it was adopted. Stray dogs usually have a greater sense of anxiety and distrust because of their time alone on the streets. Consequently, it will be uncomfortable if taken to a new place. The dog might also panic because it can hear shouting, loud music from parades, thunderstorms and lightning, and so on.

2. They Want to be Petted

You might have responded to the dog sitting on your chest earlier by petting it. The dog is likely to remember this behavior and is probably looking for a repeat. Most dogs are comfortable with being petted on their chest, shoulders, or the base of their neck. Petting it in these areas releases feel-good hormones. There is also a biological reason for this since touch improves the circulation of bodily fluids. This includes blood and lymph, which carry nutrients and release toxins from the circulatory system.

See also  Why Does My Dog Lay On My Legs? (7 Possible Reasons )

3. They Want to Communicate Their Needs

The dog might be trying to annoy you to get your attention. Lying on top of you is a way for the dog to make you aware of its needs. For instance, it might require food and water, or it might need to go to the toilet. This habit can also be developed as a matter of training. Once you ask the dog about its requirements, it waves its head, and you become aware of its needs.

4. They are Uncomfortable With the Temperature

Dogs with thick coats or furs may become uncomfortable at room temperature. They are unable to regulate their body temperature as well, especially when it is warm inside. Instead of sweating, a dog uses the panting mechanism to release heat. If this is not sufficient, the dog may come and lie on you in order to indicate its discomfort with the heat in the room.

5. They Feel You are Cold

This is typically packed behavior. When your dog is with you, they work out whether they need to protect you like they would do their pack members.

Dogs often lay on each other in an attempt to protect their mate from the cold. In case the dog feels that you are getting cold and needs warmth, it will come and lie across you in order to try and protect you. Thus, this is not just a move to show affection, but it can also have very practical implications.

Bonus Read: Why Is My Dog’s Tongue Cold? (5 Possible Reasons)

A possible motivation behind the dog lying on your chest could be that it requires grooming. The dog might be trying to communicate this problem to you. You need to check the fur of the dog. Its hair might have become tangled. There might be clumps of fur that have got matted together. Alternatively, there might be gum or seeds which might have become stuck in the dog’s fur. The dirt on the dog’s fur might also start attracting fleas onto its body. Also, if it has been a long time since its nails were clipped, they might start hurting him.

See also  Why Does My Dog Keep Looking Up At The Ceiling And Sniffing?

7. They Want to Leave Scent

This is another example of pack behavior. Naturally, dogs are packed creatures, and this pack mentality applies even in your home. Every pack has an alpha which is the one in charge.

The dog might do this in case there are other dogs in the vicinity. Dogs have scent glands in their body. If the dog sits on your chest and then rubs its body on yours, it intends to spread its scent. By doing so, the dog is marking you as part of its territory. The dog sees you as a resource for food, water, and safety, and it feels threatened if there is more than one animal in the house entitled to the same.

The dog might have spent some time alone, feeling lonely. It might have been waiting for the pet owner to come home for some time. The dog would lie on their chest as a manner of greeting them and being social with them.

Over time, graduate to leaving the house for just a short period and then coming back. Do this over and over again but each time, leave the house for a little longer. When they see this, they gradually realize that whenever you leave, you will eventually come back. Dogs are trained through repetition, and over time, they would have overcome their separation anxiety.

9. They are Asserting Dominance

It can be a sign of domination where your dog is basically saying that he owns you. Dogs have a way of communicating with each other and humans that is based on a number of body postures. Direct eye contact, for example, is perceived as a sign of authority or domination. In the same vein, it is also known to be a sign of aggression. One of the reasons that dogs take on aggressive behavior around strangers is because they feel they need to take on the responsibility of protection if they do not sense that you are providing it. They need to see that you are leading; otherwise, they will instinctively take on the leadership role, and in their world, that means showing signs of dominance. Though this could translate as overbearing in the human world, dogs actually need to see this in order to feel safe around you. That’s the more extreme explanation for why a dog would lie on your chest.

See also  Why Does My Dog Lick The Blanket? [What To Do]

Have you changed the cushions in the kennel recently? Does the dog have a bed for itself? Have you ensured that it is soft and comfortable and away from the light in the dark? In case the dog does not feel comfortable in its usual lying space, it might come to you. If it lies down on you, it is trying to tell you that the arrangements in the kennel probably need to be changed.

How to Respond When Your Dog Lay On Your Chest?

Just ensure they do not display any dominant behavior as they do this. When your dog gets used to laying on your chest while you are in bed, for example, you need to immediately stand up and assert your space.

Dogs understand these gestures and respond to them. This is especially true in cases where they are becoming possessive of the bed, for example. It would help if you let them know that it’s your space and you choose whether or not to allow them into it.

They should never feel that it’s theirs; otherwise, they will have behavioral issues. Showing this assertion should not only be limited to when they are lying on your chest or in bed with you, but it should be something that you often do during the day so that it’s imprinted. They never challenge your authority in the first place.

When your dog lays on your chest, it can be due to several reasons. They can be exhibiting a desire to be close to you and spend as much time with you as possible, or they may be exhibiting dominant behavior. Alternatively, it could also be that the dog is afraid, or it has requirements of its own that it is trying to communicate with you. Finally, it can also be a sort of pack behavior, whereby the dog treats you as a member of its clan, and its behavior is protective. Thus, you need to pay attention to the dog’s mannerisms to understand its motivation. In this article, we have tried to discuss the various motivations it might have.