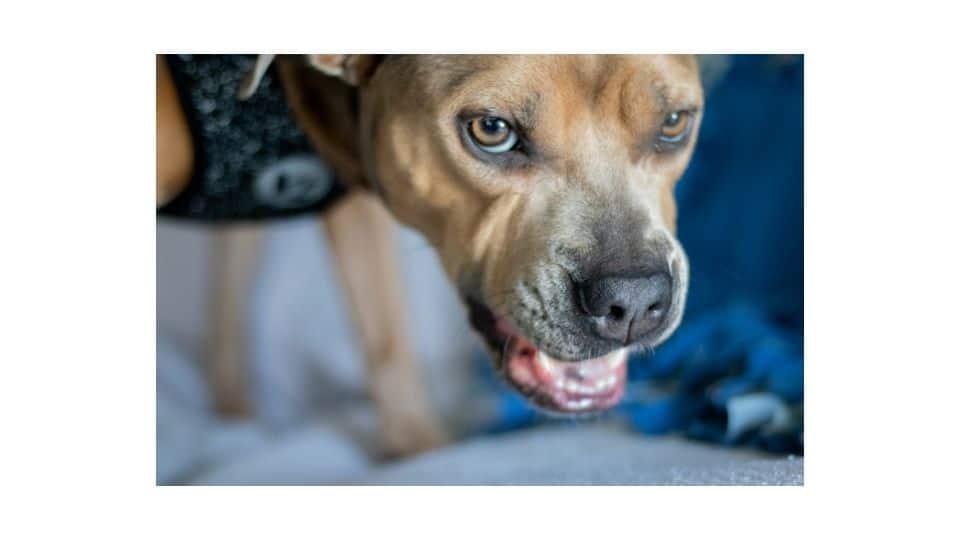 You may have noticed some weird behaviour from your dog at bedtime and are probably asking yourself, why does my dog growl at me at night? Well, if that’s a question you are asking, we have the answers for you in this article.

Nighttime growling can be due to a number of reasons. Night growling at you, however, is because they are being territorial. This is true if they growl at you in the bedroom or when you want to move them. It means that they have marked space on your bed as theirs and you need to reclaim your space to stop this behaviour.

That’s the summarised answer to this broad question but we will get a little deeper into this issue to establish what exactly the cause of this may be in your particular situation.

Reasons why your dog growls at night

Generally speaking, there are a number of reasons that your dog growls at night. Any one of these reasons could be a trigger for them growling at you or there may be some underlying issue that you may have missed.
These reasons range all the way from physical issues all the way to psychological ones.

In order to successfully get to the root of your particular problem, you may need to get a broader understanding of the different causes connected to this issue.

Let’s start off by looking at why your dog growls in the first place. There are 2 basic types of growls. The first is a playful one which your dog will use when they are excited or want to go out to pee. The second one is the one they give as a warning usually just before biting.

See also  Can Dogs Eat Mulberries - Is It Safe?

The first type of growl is not really the subject of this article and is not a cause for concern. We are more worried about the second type of growl which is linked to aggressive behaviour.

This type of growl is the one which would be cause for concern. So here are some of the reasons why your dog may growl at night.

Your dog may be anxious do to one reason or the other. They may have experienced a traumatic event during the night which is triggered every time it gets dark. They may manifest this anxiety by growling during the night.

The growling may not be directed at anything in particular but they may turn and growl at you if you try to get them to stop the behaviour.

This kind of issue is best handled by a behavioural specialist. A skilled one will be able to identify the cause and train them to get over the trauma.

When a dog begins to lose its eyesight, usually due to old age, it may lead to nervousness during the night. It is mainly caused by their inability to see in the dark due to their deteriorating sight. When your dog has this problem, they may tend to growl at night.

When this is the situation you have, leave a night light on in the area where they sleep to help them settle down.

Just like bad eyesight, the poor hearing may also cause to get anxious and exhibit this anxiety through aggressive behaviour. They may growl a lot at night because of it.

A dog will growl to protect what they perceive to be their territory. When something gets within that territory, they will growl to ward them off. They will do this when they feel that you are getting to close to them therefore violating their personal space.

See also  Dogs Eyes Rolling Back? Why This Is Happening And How To Stop it?

In such situations, a behavioural specialist or trainer would be what is needed to remedy this problem.

Don’t discourage your dog from growling at night

One thing you should remember to do is not discourage them from growling in specific situations (there are some situations that you should and we’ll talk about this later on). Growling is one of the ways they communicate and you don’t want to prevent them from doing that.

Rather, make it a point to find the cause of the problem and then take the necessary steps to get it solved.

Why your dog will growl at you at night

The first one was when they tried to move the dog from the position they would be in. The other situation was when they are in bed with them and your hand happens to drift into space they are in while you are awake or during sleep.

The scenario we just explained is caused by you slacking as far as setting boundaries is concerned. When your dog growls at you in your bedroom at night, it’s because they view that space as their personal territory.

The thing with this type of behaviour is that it just doesn’t just suddenly happen. It is the result of a gradual process where they may have started off with a whimper to express their displeasure which eventually built up all the way to a full growl.

At this point, you need to take back territory and let them know that it’s your house even though they live in it too.
How to fix the problem of your dog growling at you at night

See also  Are Great Danes Hypoallergenic? Do they Shed a Lot?

Dogs work with a pack hierarchy and they understand the territory. They know that every pack has an alpha and as long as the alpha asserts dominion, the dog will always respect them.

From time to time, they will, however, test the limits of this domination to see whether you are going to put your foot down.

If you don’t, they will push the limit each time and, before you know it, they are growling at you over a space on your own bed.

You will need to take back your bedroom. Prepare a place for them to sleep which is outside your bedroom if they don’t already have one.

When you are going to bed at night and they follow you, turn back at the door to your bedroom and in a dominant posture with hands to your side, tell them “No”.

Point to where they are supposed to sleep until they go there. Repeat this until they understand that the bedroom is your space and not theirs. Growling behaviour will soon stop.

Conclusion on dog growls at night

Though dogs may growl at night for a number of reasons, the main reason that they growl at you during the night is primarily due to them claiming a specific thing or area as theirs.

Once you take affirmative action and put your foot down, you reassert yourself as the leader of the pack and they will have no choice but to fall in line.