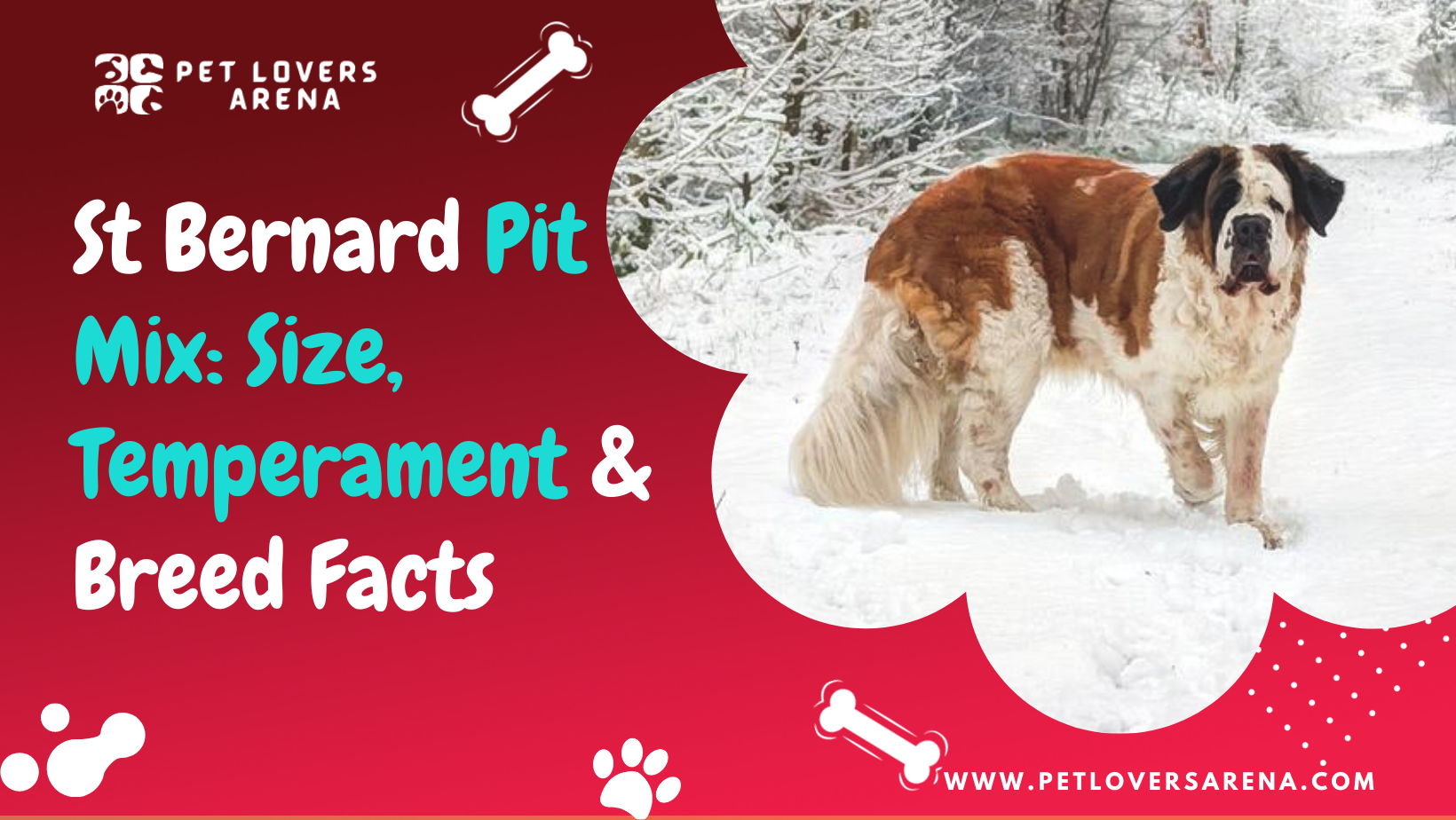 The St. Bernard Pitbull Mix possesses the traits of both of its parents, being loyal as a pitbull and loving as a St. Bernard. In addition, St. Bernard pit bulls are very protective of their families and are always eager to please their masters. It is easy to train a St. Bernard pit bull mix, but you need to be consistent with the training schedule and include moderate exercise levels in your dog’s schedule.

Homes that can provide a safe and stable environment for the dog with mental stimulation are fit for the living of St. Bernard pitbull dogs. This article will get information on this dog breed, including its size, temperament, facts, etc.

The Origin And History of the St. Bernard Pitbull Mix Dogs

St Bernard’s often get referred to as the oldest and purest dog breed. St. Bernards are mainly rescue dogs. There have been many cases in the past few years where, with the help of St. Bernard, rescue teams have been available to save numerous lives.

Pitbulls are one of the most misunderstood breeds of dogs today, and the origin of Pitbulls plays an important role in this misconception.

Originally, pit bulls were used as fighting dogs to bait bulls as per the game back in the 1800s. In 1800, there were baiting games, and for those, aggression and agility were the required qualities. At that time, crossbreeding between terriers and bulldogs was very common.

However, these dogs were not only made more aggressive but were made and trained to be gentle with the owners as well. Due to the aggressive nature of dogs in dog fighting, many people regard them as dangerous but have hardly any knowledge about the nature of these dogs to be good with their owners.

When UKC officials recognized this breed, it was called an American Pitbull Terrier. However, recently the AKC recognized a slightly different breed from this and named the breed as the American Staffordshire Terriers. These dogs differ a little, but the main motive was to separate them from the Pitbull Terrier, who has a history of dog battling.

The breed has repeatedly grown in the US, but as per its reputation, there are still many restrictions on these dogs as people believe these dogs to be dangerous. Today, Pitbulls are under strict laws and are being monitored also.

What Are the Types of St. Bernard Pit Bull Mix Dogs?

When there is a mixing of different breeds of dogs, there is always an uncertainty that the dog’s characteristics will belong to which parent. The characteristics can be of either parent, and many factors influence them.

When there is a mix of St. Bernard and pitbull, the uncertainty of the offspring’s characteristics is even greater as the pitbull dog itself has different varieties. If your St Bernard pitbull mix puppy is being brought or adopted, you should learn about the parents and their characteristics. Here are the differences in the weight of different St. Bernard and Pitbull Mix dogs that you can have a look at in brief.

What is the Appearance of the St. Bernard Pitbull Mix?

In general, St. Bernard pitbull mixes have characteristics of both the parents, but there can be some general variations too.

The main distinction between a St. Bernard and a pitbull is their height; otherwise, both are working dogs with short and broad muzzles. In addition, these dogs have an athletic background, which gives them agility; they can easily fight with other dogs in dog fighting for hours.

The physique of a St. Bernard pitbull mix depends upon both its parents, but for the height factor, this dog mainly depends upon the characteristics of St. Bernard. It is interesting to note that the dog will be taller if the pit bull dog has great height.

In terms of weight, this breed is on the heavier side. If the breed of dog is taller, the weight of a St. Bernard pitbull mix dog will be heavier. However, if the dog is of a smaller size, then the dog’s weight is more than that of the pitbull.

The height of a St Bernard pitbull mix ranges from 20 to 27 inches, and the weight ranges from 50 to 120 pounds.

St. Bernard and pitbull mix parents have very different coats: St. Bernards have a long and fluffy coat that helps keep them warm, whereas Pitbulls have a shorter and easier-to-groom coat.

The mixed breed mostly acquires the coat from the pitbull dog, keeping it simple. But in some cases, if the St. Bernard genes or features are more prominent, the mixed-breed dog may acquire a coat from a St. Bernard.

In the case of the dog’s color, it may depend upon either St. Bernard or pitbull dog. Depending upon the variation in the color of pitbull dogs, your mixed breed dog can have the color of any shade dusky, brown, etc.

The main reason for creating this mixed dog breed is to include the characteristics of the behavior of both the dogs in this particular dog. The main behavior of the mixed breed will depend upon the genes. Here is the comparison you can make between both the dogs by considering the personalities of each separately.

Pitbulls are very energetic and active, even more so than St. Bernards. Pitbulls are very friendly dogs who love to meet new people. Because of this behavior, the unknowns suspect them to be true guard dogs.

These drugs were used for blood sports or battling and thus are considered aggressive dogs in the past. But these dogs are just aggressive towards humans because they get such good training. Only if accidents happen when the dog is not treated well; otherwise, it’s a great and playful companion.

St. Bernards are extremely friendly dogs and are famous as they are very gentle and peaceful. These dogs are calm and affectionate towards their owners and have a good temperament, making them the best choice for families with children.

St. Bernards are not only peaceful dogs but have a great sense of smell as they’re used as search and rescue dogs. These dogs never get aggressive unless and until it is for the betterment of their family.

3. What’s the Personality of the St. Bernard Pit Bull Mix?

St. Bernard pitbull mixes are extremely peaceful dogs like St. Bernards, but they are active and energetic like Pitbulls.

They are affectionate and watchful towards their owners, so they love to spend time with the family. These dogs have lively personalities, and they love to play with children.

The other traits of these dogs depend upon the genes they hire from their parents. These dogs can be like St. Bernards or Pitbulls, but if the traits are like Pitbulls, they will not be aggressive but protectors of children. But still, owners should keep a watch on these dogs as they can easily knock out a small kid due to their big size.

To ensure your dog’s proper health and well-being, it’s extremely important to give them proper grooming and care. It’s not tough to manage a St. Bernard pitbull mix dog as it has a mid-length coat hair, but if the dog acquires the characteristics of a St. Bernard, only then will things get tough as they have long hairs.

Brushing once a week is enough for medium-length hair in your dog’s coat, but it is important to brush twice or thrice a week for dogs with long hair coats. This brushing will prevent the hairs on your St. Bernard pitbull mix from being all around your surroundings.

Besides this, washing the St. Bernard pitbull mix pup is also equally important. For those with longer coats, it’s important to wash them often, but considering their size, it’s not an easy task. Along with this, trimming the hair and nails of your dog once or twice a month is important. Rest be assured.

It is important to give proper training to a St. Bernard pitbull mix dog because you have to socialize your dog with other dogs and humans. Thus, it will be extremely calm and friendly with other dogs as an adult.

Training these dogs with a positive reinforcement method will be great. These dogs are very fond of receiving affection and, thus, they will love to do anything to receive it from the owner. Appreciating your dog with sweets and treats during training will help the dog learn to train fast.

See also  12 Cane Corso Colors: Know Them All (With Pictures)

What Are the Health Issues Faced by St. Bernard Pitbull Mix Dogs?

St.Bernard pitbull mix dogs can inherit several; minor and major health problems from their parents. For example, St. Bernards and Pitbulls are prone to hip dysplasia, and so is the St. Bernard-Pitbull mix dog. The dog is also prone to congenital diseases like aortic stenosis.

In addition, both the dog’s parents are pitbull, and St. Bernard is prone to eye issues like cataracts. However, Pitbulls are more prone to hypothyroidism, while St. Bernards suffer from bloating or digestive health issues.

Apart from these, Pitbulls are more prone to allergies, so it’s better to watch your mixed breed dog for allergies.

What is the Diet of a St. Bernard Pit Mix Dog?

Because a St. Bernard pit mix is a large dog, it requires a nutritious, high-quality diet. These dogs require high-quality food twice a day, but the diet still depends upon your dog’s size, weight, and other health conditions.

High-quality kibble with high protein content is the best thing you can give your dog as a diet. Give your St. Bernard pit mixes dog Alaskan salmon oil as a supplement. This salmon oil is rich in omega-3 fatty acids that keep dogs’ coats healthy and shiny. To keep the dog healthy, provide it with prebiotics and fresh water every day.

What Are the Exercise Needs of the St. Bernard Pit Bull Mix?

The nature of your St. Bernard pit mix will depend upon both its parents. It can either have the characteristics of a pit bull or a St. Bernard.

Exercise is necessary for these dogs as they are more prone to obesity. But still, when you make your dog exercise, make sure they are not getting exhausted at any point.

Ans: These dogs are very good with kids as they have characteristics of both Pitbulls and St. Bernards. The nature of St. Bernard’s dog is calm, while that of the pit bull is aggressive, so they have protected nature. But they are big enough to knock down small kids, so be careful and keep a watch.

Ans: Pitbulls bark a lot, and St. Bernard is quieter than the Pitbulls. St. Bernard and pitbull mix dogs’ barking characteristics will depend on either of the parents.

Ans: Because of their size and conservative nature, St. Bernard pit bull dogs can make good guard dogs. These dogs will make you aware of intruders as they love to meet new people.

St. Bernard pitbull dogs are one of the most popular, loving, and loyal breeds in the US. If you lead an active lifestyle, this mixed breed dog could be a great choice for your household to help you too.