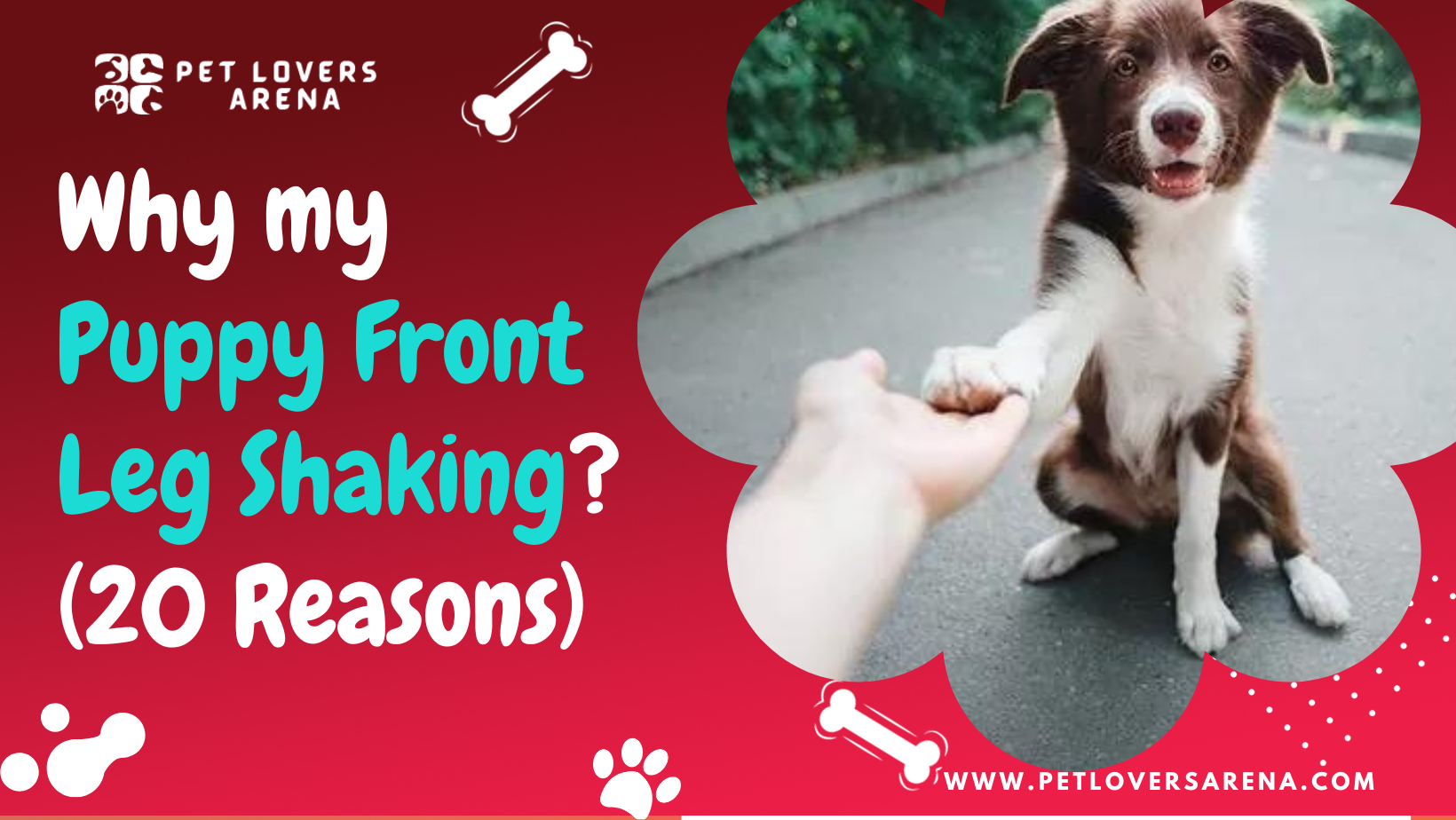 Your dog’s legs may shake if there is something wrong with them. It’s your dog’s way of talking to you. Dogs occasionally shake, which is natural. If they are enthusiastic or have just taken a bath, they do so to eliminate extra water from their fur. Leg trembling, however, might also point to problems that need to be addressed.

There are a variety of causes for shaking and trembling pup limbs. It could simply be your puppy’s attempt to settle down when resting, or it could indicate anxiety, cold, eagerness, or fright.

Leg tremors can also result from physical discomfort or existing specific disease, such as bone and joint illnesses or neurodegenerative problems. In addition, your puppy’s limbs may wobble while seated due to its weakened legs, which are either feeble from malnutrition or obesity.

Nevertheless, if your puppy continues to tremble, particularly if it restricts their mobility, that might indicate something is amiss. Let’s explore the several potential causes of puppy legs shaking in more detail.

Also Read: How To Groom A Dog At Home?

There are a variety of causes for shaking and trembling puppy limbs. It could simply be your pet’s attempt to settle down when seated, or it could indicate anxiety, cold, restlessness. Puppies can tremble much as people do in stressful or frightening circumstances. Tremors are usually only one of several symptoms you’ll encounter. Heavy breathing, compulsive licking, whimpering or howling, and peeing indicate nervousness. Attempt to pinpoint the root of your puppy’s trembling if worry is the culprit. They could find their surroundings unsettling and strange. Loud noises, unfamiliar individuals or circumstances, and anxiety issues can bring on worry or panic.

In dogs, sprains and wounds can result in uncontrolled trembling. An indication of uneasiness and agony is trembling. Many canines will tremble to get their owners’ notice. This behavior may be your puppy’s attempt to draw your awareness to its sores. They could also repeatedly lick the painful spot. Examine your dog’s front paws for any indications of cracks or broken skin. The tremor usually only affects one of the front limbs in these canines. Numerous factors, such as osteoarthritis, a femur fracture, a tumor, or a fresh bite, might explain this behavior. It would seem reasonable to look around the leg to determine whether something is wrong.

Your dog may show signs of muscle atrophy or exhaustion if they are trembling in one specific location, particularly its limbs. Leaving your dog some time to relax after a vigorous stroll or sprint may assist if they’re unfamiliar with getting so much activity. After a strenuous game of fetch or a long gallop, an overly excitable dog may tremble. Older dogs may also tremble from exhaustion, stress, and muscle wastage.

See also  When to Euthanize a Dog with Liver Failure? (Vet's Advice)

Trembling is one of a few obvious signs that your dog is cold. Trembling occurs as a dog automatically tries to acclimatize when its body temperatures are low. This is especially true when your puppy’s species is indigenous to hotter areas or when those characteristics are inherited. The pup will shiver if it is chilly outdoors or left roaming in the icy yard with no shelter. Short-haired dog varieties struggle to handle the weather. Even inside the house, they might like to be covered with a quilt.

Underweight pups lose muscular mass in addition to fat. For the support of limbs and general strength, muscles are essential. Leg instability and shaking while seated or standing might result from muscle wasting in your pet’s limbs.

Your puppy may have various health concerns associated with being overweight, notably arthritis and back disorders. Your pup can acquire bulk mostly due to increased caloric intake and insufficient activity. The musculature might not be as powerful as a result. Due to the difficulty in supporting the additional load, your pet’s legs may wobble.

Also Read:- Why Does My Dog Lay On My Legs? (7 Possible Reasons )

There are several different causes of nausea in puppies. It might have consumed more food than its tummy could hold, dined too quickly, or consumed things it shouldn’t have. The puppy’s front limbs may tremble while strolling or upright if it is queasy. It could even choose not to eat since it will seem worn out and lazy. Nausea may also be a sign of a liver or kidney illness if you keep an eye on your puppy’s food and are certain that nothing inappropriate has been consumed. Contact your veterinarian if the pup exhibits other signs, including puking, drooling, or dullness.

Seizures are among the most typical symptoms seen in canines with neurological problems. One of the main indications that this illness is present is uncontrollable muscular movement. When your pet’s brain function is momentarily disrupted, it is experiencing a seizure. It could be challenging to foresee when the pup might experience a seizure. There may be several or simply one episode. The pup may behave normally between these instances. Chemicals, hepatic or renal diseases, brain tumors, or inherited conditions can bring on seizures.

Unexpectedly frequently, dogs will eat something rotting, poisonous, or harmful when outside. Trembling, spasms, vomiting, diarrhea, and strange behavior are all signs that you may have consumed something poisonous. Poisoning in your dog can result in shuddering and can be brought on by chocolates, weeds, or junk from the garbage bin.

See also  When to Put a Diabetic Dog Down? (Expert Advice!)

A puppy’s nervous system could be impacted by shaking puppy syndrome, also known as hypomyelination, which influences its whole system. Tremors start immediately after birth in canines with shaking puppy syndrome, and manifestations can appear as young as two weeks old. In addition to trembling, the pup could have mobility, stability, and coordination problems, and their limbs may look more comprehensive than usual to stabilize themselves. The trembling may get more extreme when they’re excited. Luckily, most puppies ultimately make a full recovery and, by the time they reach between one and one-half years old, seem to be mostly healthy. Whereas most dogs that recover will always exhibit minor hind limb shivers, less seriously afflicted puppies may regain their normal behavior by 3–4 months of age.

An impaired bone development, particularly at the joints, is the leading cause of this bone disorder. Surgery is often required to stop the development of arthritis. The most important thing you could do for your dog if they have arthritis is to manage its body weight with a nutritious diet. This will assist in lowering any extra weight that strains the limbs and worsens discomfort. To build up the muscles in your puppy’s legs, you should also exercise them frequently.

Hip dysplasia is a condition in which the femur bone’s cap does not fit snugly into the orbit of the hip socket. The hip joint gets unsteady as a result of inadequate head-socket alignment. As a consequence, a pup may experience persistent discomfort and also have unsteady legs.

An illness, a brain hemorrhage, or a brain tumor may cause muscle tremors. Your dog’s limbs shaking might be a sign of brain damage. In addition to trembling, other indications, including shaky walking, disorientation, or fever, could also be present.

Occasional trembling is among Addison’s disease’s most prevalent symptoms. This hormonal illness often impacts young to middle-aged female canines. While Addison’s disease cannot be cured, most puppies with the condition can be effectively treated with continued medication.

Supplements, including vitamin D and calcium, have been linked to an overgrowth in pups, according to recent research. Pups who mature too quickly are more prone to experience trembling linked to bone and joint issues. Serve your pup in modest portions 3 to 4 times each day to make sure it obtains the vital nutrients without the need for pills.

Distemper is a typical reason why pups have wobbly legs. The paramyxoviridae family virus brings it on. Your dog is in danger of contracting this disease if it has not had all of its shots. Puppy breeds that have not had all of their vaccinations are typically affected. Once affected, it might take as long as two weeks before symptoms start. Nevertheless, months after the infestation, neurological signs such as muscle jerks may appear.

When a puppy’s blood glucose levels are low, front limbs may also shake. Hypoglycemia can be brought on by exertion, skipping meals too often, anxiety, and parasitic infections. The risk is more significant for puppies than adult dogs, as they consistently struggle with controlling their glucose levels. They require more sugar since they have a fast metabolism and a lot of energy. Dogs with diabetes are especially at risk from this problem. In many cases, insulin excesses result in sharp drops in levels of blood sugar. Puppies with tumors that secrete insulin may also experience hypoglycemia.

For your pup’s body to operate properly, the salt concentration must be just right. A dog with a high salt concentration in their blood might get sick. Providing your dog with salt-rich meals is a typical trigger of salt poisoning in humans. Pups may tremble, act erratically, and suffer from an upset tummy.

Front limb shaking could be utterly illogical during the most aggravating circumstances. It could be challenging to identify the underlying root of front leg trembling in a healthy dog. Sometimes it can just be a matter of habit. In such situations, we typically adopt a wait-and-see strategy to ensure nothing worse happens.

Puppies may shake for a variety of reasons, from minor to severe. It could be delightful to meet you after spending an entire day without you. Trembling may also be brought on by other sensations, including worry, tension, and terror. Injury is yet another typical reason. If your dog enjoys playing energetic activities, it may experience mishaps that lead to injury. Pain from wounds can make dogs shake uncontrollably. Determine the cause of your dog’s front limb shaking and implement the necessary solutions. Conduct training is advised as a therapy for emotional responses.