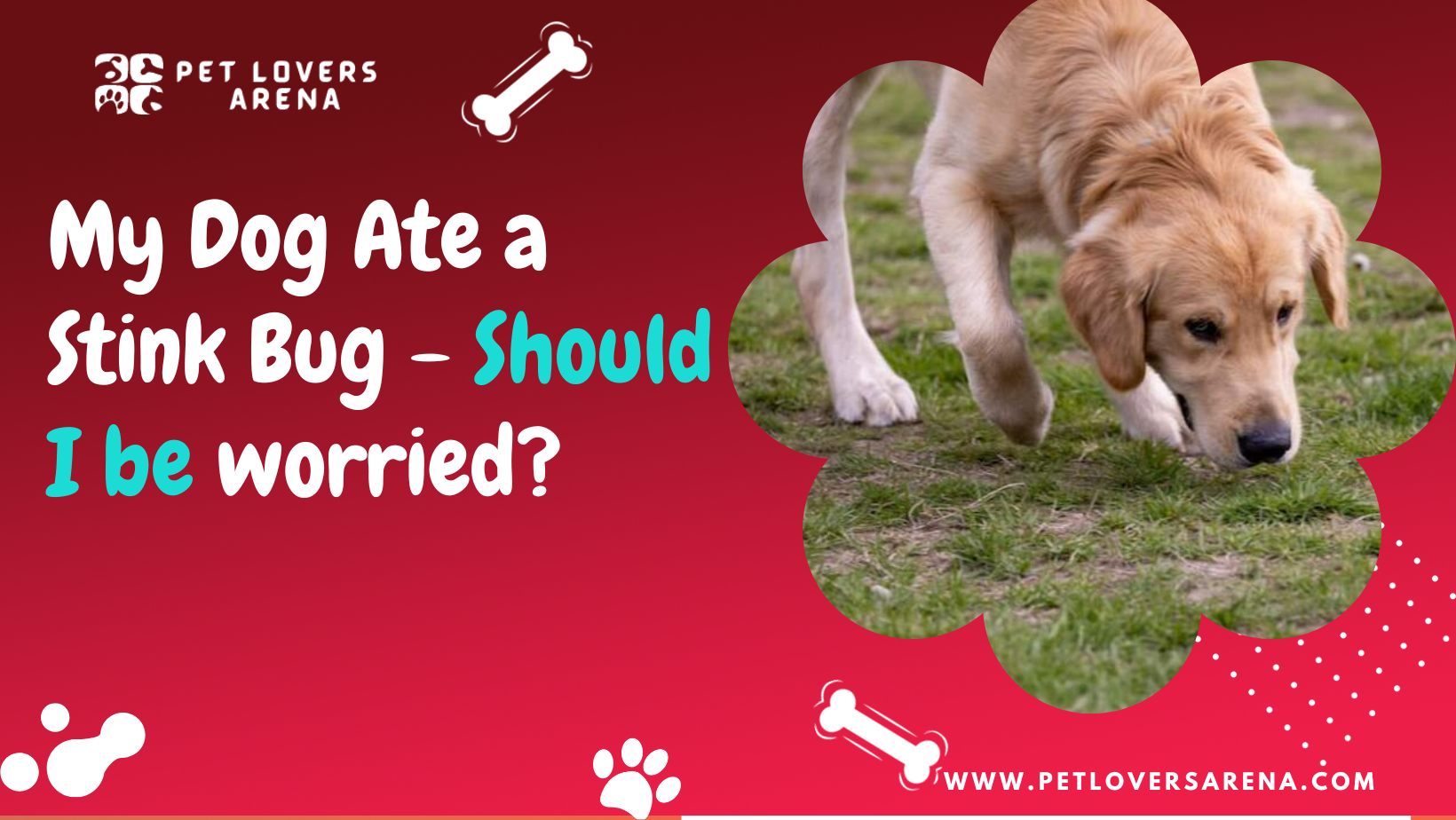 As the name suggests, stink bugs have a foul and nasty smell. So, of course, dogs would never find them treat-worthy, yet they end up eating them.

If you have also witnessed your dog eating a stink bug and are worried about what will happen next, worry no more!

We will discuss, in full detail, what stink bugs are and how you can treat your dog in case they have consumed one.

It will surprise you that bugs’ secretions attract dogs’ attention despite having a bitter taste (as it is made up of “Aldehydes”), eventually making them vomit. Yet, despite the smell of stink bugs, they are eaten by dogs.

Consuming stink bugs has no negative or long-term impact on dogs. Most likely, if your dog ate a stink bug, they won’t experience any negative consequences.

Although most dogs who eat bugs don’t have serious problems, it’s essential to watch out for any concerning symptoms. For instance, if stomach worms are not treated, they might have major consequences.

No. Dogs don’t consume stink bugs, but sometimes, accidentally, they do. As discussed, there are no long-term health impacts on your dog’s well-being, and these bugs are not harmful to canines. So, apart from the unpleasant taste, your pet can safely consume a stink insect.

But that is not a reason why you should not do about the presence of stink bugs around your dog.

Later through the blog, we will discuss the ways you can avoid your dog from coming in contact with stink bugs in the first place.

Dogs chase after, catch, and eat this insect. The dog spits out the insect because it tastes and smells repulsive. There might still be negative effects that the dog has to deal with.

At most, they will only experience vomiting because biting the bug can upset their digestive system, and the animal can begin to vomit. If everything goes fine, the vomiting often stops within 8 to 12 hours.

What Are Stink Bugs?

Stink bugs are a type of insect that feed on plants. In fact, fruits might become dangerous to consume if stink bugs have eaten them. Stink bugs consume plants. They can be black, and even more of a yellow tint but are commonly a greyish-brown tone.

Stink bugs have legs that extend out from the sides of their bodies like spiders, but their closed wings have the form of a shield. If the appropriate precautions aren’t taken to keep stink bugs away from plants, crops like potatoes, corn, and beans may get infested with them.

See also  Can Dogs Have Imitation Crab? 4 Reason to Avoid

How To Avoid Your Dog From Eating Stink Bug?

Check your house for any cracks and seal them, keeping the doors open to the garden shut. Examine the area for cracks around the chimney and other utilities to seal these holes. Replace screens that are damaged or torn.

Change ruined displays. Fill up all the cracks in your baseboards, trim, and utility areas. In your garden or yard, search for egg masses concealed by foliage and eliminate them.

Utilizing a vacuum cleaner is the most effective technique to eliminate stink bugs inside your home. However, make careful to completely clean the vacuum after use to avoid the odor continuing for a long time.

You can also consider using pesticides when your dog is not at home, as the immediate effects of certain pesticides on dogs include vomiting, nausea, and chemical burns to the eyes and hair. In addition, central nervous system injury is a result of prolonged exposure.

Should I Be Worried If My Dog Ate Stink Bug?

Even though they are not toxic, the unpleasant smell and bitter taste will probably cause your dog to throw up. A stink bug gives out the scent while it is still alive, making it more potent than a dead one.

Although stink bugs are non-toxic, their foul-smelling discharges will upset the digestive systems of your dog. Dogs may also drool excessively in response to this irritant.

If your dog eats stink bugs, it could potentially cause mouth irritation. They can induce excessive drooling for a few minutes after catching a stink bug.

Dogs who lick stink bugs experience less serious side effects than dogs who eat them, such as drooling, vomiting, diarrhea, and eye discomfort. However, they often only endure a short time under normal conditions.

Since stink bugs cause no harm, this does not establish that you should permit them into your home. Always be on the lookout for these insects to prevent your pet from suffering an injury.

However, when distressed or crushed, they produce foul-smelling odors. If these fluids go into your dog’s eyes, they could hurt.

If stink bugs locate the ideal location to dwell in, their stink will attract other stink bugs and ensure that the predators are away.

Although they will attempt to chase after and devour insects, dogs’ predatory instincts have never failed. Dogs have no issues eating stink bugs because they don’t sting or bite.

If your dog hasn’t eaten any stink bugs, but you’ve seen it attempting to, we suggest training it not to. Anytime you see it chasing the insects, divert it. The best thing would be to eliminate the stink bugs in your bedroom.

As a dog parent, you should always watch out for their condition. Consequently, keep an eye on your dog while running about (especially outdoors). Likewise, always call a veterinarian if you think your dog may have ingested a bug.

What Should I Do If My Dog Ate A Stink Bug?

The smell of an eaten stink bug will probably be present on your dog’s lips and fur. You should first shampoo and bathe your dog, but remember that doing so could make the odor linger longer in their coat.

In that case, you can prepare a solution using baking soda, liquid detergent, and 3% hydrogen peroxide. Alternatively, you can also use two parts water and one part vinegar.

Use it on your dog’s fur. Don’t let it get in their eyes. After five minutes, you can thoroughly rinse it off. Then continue with your regular dog-washing procedure.

It’s essential to take your dog to the doctor as soon as possible if they display signs of prolonged vomiting or diarrhea, excessive drooling, swollen mouth, rashes, worms in their feces, or changes in appetite or behavior.

Also Read: How Do I Sedate My Dog To Cut His Nails? {Complete Guide}

How to Protect Your Home From Stink Bugs?

As previously discussed, stink bugs are insects that leave an odor when threatened, only to defend themselves from danger.

Some of the reasons stink bugs are nesting in your home or visiting often are:

Getting rid of stink bugs

To keep them at bay, examine all potential entrance sites first, then seal any noticeable cracks or openings from where there could be a possibility of these insects entering.

During the winter months, stink bugs hibernate. They are active during the summer. They are also found in areas with exposure to sunlight or electrical. Therefore, any area receiving excess light has to be inspected.

Several chemicals available in the market claim to rid you of stink bugs. These pesticides can kill stink bugs and be used around windows, common entry points, and other areas where the bugs like gathering. Most of them are even effective in clearing your space of bugs.

You can also make use of several home remedies, among which using white vinegar mixed with dish soap and water is the most effective trap for stink bugs when sprayed directly on them.

Are There Some Insects That Are Unsafe For My Dog?

Yes, there are many insects that your dog should avoid eating, including stink bugs. As we have seen, there are a few serious side-effects of eating stink bugs for your dog.

However, it doesn’t mean you would allow your dog to continue eating them or do something about clearing up the space near your dog to avoid stink bugs in the future.

Other insects, like cockroaches, lightning bugs, caterpillars, etc., are also a threat to your dog’s health, and it is best if they remain away from your dog’s place of being.

Read More: Why Is My Puppy Front Leg Shaking?(14 Reasons!)

Learning how to treat dog insect bites, identifying typical symptoms, and knowing when to take your friend to the doctor for additional treatment are all part of being a dog parent.

It’s just a matter of time until our canine companions come into contact with bees, ants, spiders, centipedes, or any other variety of insects and vermin, as the bulk of them love spending most of their days outside.

You should look into insect treatment solutions if your dog frequently engages with pests within your home.

Depending on the pest, you may easily purchase various preventative techniques at your neighborhood store, and you can spray your home in a few minutes. However, you might need to contact pest control if the problem is more serious.

Similarly, dogs can have allergies to insect bites, yes. However, their responses may develop into something more serious that requires a visit to the veterinarian. Do not delay taking your dog to the vet in such a case.