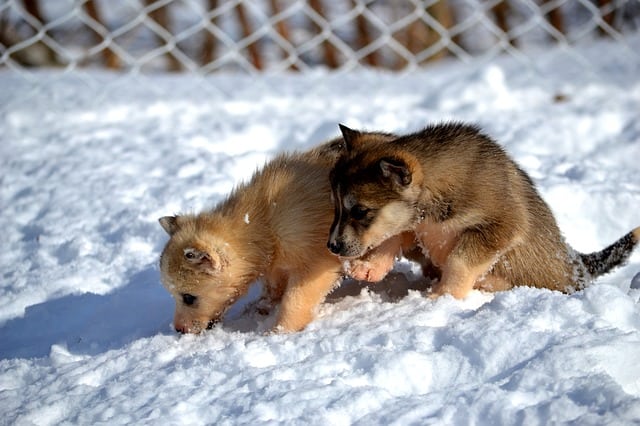 Siberian Huskies usually have between four and eight puppies, with six puppies being the most common litter size. However, a wide range of factors can make the number of puppies that huskies have smaller or larger.

These factors include the well-being, age, and size of the female dog, the age of the male dog, and how closely both are related.

However, there is no way to work out exactly how many puppies a female husky will have in each litter before, or in the early stages of, her pregnancy. The most accurate way to determine the size of the litter is not until after the female has been pregnant for at least 45 days when a veterinarian can take an x-ray to count the puppies.

How many litters can a husky have?

Age is one of the most significant factors affecting how many puppies huskies will have. Younger females under the age of two years, and those that have not yet had puppies, will often have smaller litters, and may only give birth to two puppies.

However, if the puppies and mother are healthy, these females will usually go on to produce larger litters in the future, with their third and fourth litters likely to be the largest.

Females and males over the age of five years are also likely to have smaller litters. Dogs aged over five years have fewer, lower quality eggs and sperm.

This means they have less chance of the male’s sperm fusing with the female’s eggs, which can lower the number of puppies that the female husky can have.

See also  Why Are Huskies So Vocal?

Size and health, particularly of the female husky, can also have a significant impact on the number of puppies she will have.

Females that are smaller than average husky size, are more likely to have fewer puppies. However, those that are well-nourished, and fit are likely to be able to support larger litters than those on poor quality diets. A good diet that is high in protein should be fed to breeding female huskies all year.

Exercise is also important for active working breeds like huskies and is key to maintaining their optimal health and weight.

Breed standard Siberian Husky females should be between 35 and 50 pounds (or 16 to 23 kilograms)s. It is important for breeding huskies not to become too overweight, as obese female huskies likely to have fewer puppies per litter than non-obese huskies.

As with many breeds of dogs, understanding bloodlines or pedigrees are vital in Siberian Huskies. In particular, inbreeding, when the male is too closely related to the female, can produce smaller litters.

This can be the result of congenital problems, which mean that some puppies do not survive to birth or for long afterward.

The way the female husky becomes pregnant and the time of year can also affect litter size. Females impregnated naturally and those that give birth in spring likely to have a larger number of puppies than huskies that are artificially inseminated, the dog equivalent of IVF in humans, or those that give birth at other times of the year.

How many puppies can a husky have the first time?

Although, on average, Siberian Huskies can have four to eight puppies, age, size, health, inbreeding, and the way that a female husky becomes pregnant can all impact the size of her litter.

However, it is important to remember that, with litters of puppies, larger does not always mean better. Larger litters mean more puppies are competing for nutrition both before and after they are born.

This can put more strain on the female and may prevent puppies from getting all the nutrition they need naturally from their mother.

More important than the size of the litter, is the health and welfare of the breeding dogs and the puppies. Responsible breeders who ensure that their dogs are fed good quality diets, have proper exercise, and are of appropriate age and not too closely related, give their huskies the best chance of producing happy and healthy puppies.