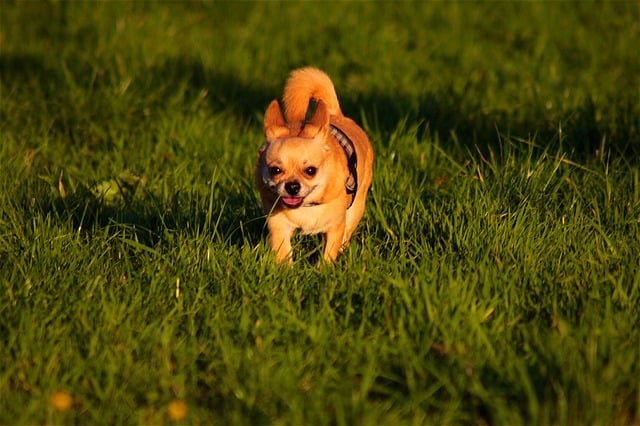 Chihuahua’s Have Great Speeds In short Bursts! There are all the different variables to consider, but the general rule of thumb is, The shorter the legs, the shorter the distance.

The Chihuahua has many attributes, but long-distance racing just isn’t one of them. They can shoot off in bursts of an average of 15-20 mph, and they definitely make that look easy.

However, they usually lose momentum after two to three city blocks. Those little legs are great for getting around, just not for getting anywhere distant quickly. Such a loving and robust animal.

Taking care of the compact breed is almost effortless. Their nails are the only things that need constant upkeep with frequent nail trimmings.

Short nails are optimal for running around. Making their notorious short bursts safer so they don’t get nails caught or snagged on anything.

Gone unattended for too long in the grooming department can cause serious problems. A great and hearty breed, the Chihuahua, knows how to do short bursts with style and outstanding acrobatics in some unusual cases.

Your furry friend is courageous and not a lazy protector by any means. I have known them to be good travel companions and excellent walking partners who can go for quite a while. Short runs and long walks are beneficial for this breed, just don’t overdo it.

Can you run with a Chihuahua?

Every Chihuahua owner knows they love their nap time and cooperating with long naps is necessary for these little guys stamina.

They are notorious burrowers. Watch where you’re sitting with these animals around. They can perch just about anywhere they can reach too. Whether on top of your knee or the back of the couch. Their favorite place is always with their owner.

Or in the window faithfully waiting for their owner’s return. They need the pack leader for comfort and social interaction. Usually running ahead to check for any danger before entering the next location in the house, or outside. The protector and the cuddle buddy all in one.

They need guidance, though. And training. A Chihuahua that runs away from you is a danger to himself. And because of their powerful short sprints, it’s difficult to catch up to these guys in the short run.

Your Chihuahua may seem like they can keep running back and forth forever. But pay closer attention and you’ll notice after every bout of high-speed sprinting there is a brief break.

In which the animal will continue to bark standing in place and then continue on its tirade of unwavering protection and devotion, Theses dogs take five steps to every one of certain larger breeds and have a reputation as one of the longest living breeds.

Some owners will tell you it’s because they put themselves wholeheartedly into their family. Speed also depends on if your pet is a crossbreed or not. Age and weight also are deciding factors on the speed of your Chihuahua and how fast it can go. The weather is too.

But roughly a majority of breeds and crossbreeds stay sturdy at 10 to 15 mph. They’re a joy no matter what form they take, often running circles around us for a bit out on our walk or jog and then trudging along as best they can until they get a second wind.

See also  Why Do Chihuahuas Bark so Much

Once home it’s a power nap after a drink of water and a cooldown. Usually around two to three hours. (Or until someone rings the doorbell.) Then it’s back to the business of keeping home and owner safe.

And no one can do that like a Chihuahua. To own one is to love them and appreciate the effort that goes into all that they do. I think the A.K.C. says it best when they say Chihuahua’s have either an apple head or deer head and describe them as “graceful, alert, and compact little dog with a saucy expression.

” Also, they say, “In their eyes, they’re the most important person in the room.” So, whether they run 20 mph or less, we will still love them.

But if you really want to help your buddy reach top speeds, play is still the best way. A happy, healthy dog always goes the distance. Clock your dog the next time you’re outside playing.