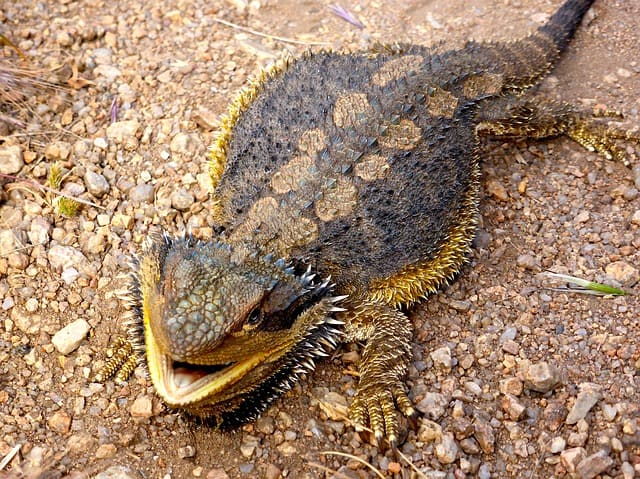 In order to properly care for any pet, it is important to provide quality care at all stages of life. While baby bearded dragons are tiny and cute, they won’t stay that size for very long! As your beardy grows into its adulthood, knowing approximately how big it is going to get will prepare you for finding an appropriate enclosure and providing the best quality care.

How big can bearded dragons get?

Baby bearded dragons will generally be anywhere between 3 and 4 inches long from the tip of the nose to the tip of the tail. Upon reaching maturity, they can be anywhere between 16 and 24 inches long. While there is no exact science to predicting exactly how long your beardy will get, there are a few factors that generally influence the size that a bearded dragon can grow to.

Factors that Influence the Size of a Bearded Dragon

When adopting a bearded dragon, make sure that you know exactly what breed it is, as it may then need different accommodations to best fit its needs.

Males are typically longer than females, while females tend to wider. Expect a male to be closer to 24 inches, while a female may only get up to 19 inches.

In order to tell the sex of your bearded dragon, look at the underside of its tail. If it has two visible bulges running parallel to each other, it is a male. If there is only a single bulge, it is a female.

If this method does not immediately work, take your beardy into a dark space and check the same area again while shining a flashlight through the base of the tail.

A bearded dragon that does not receive sufficient nutrients in its first few months of life may suffer from stunted growth. Make sure that you are providing your bearded dragon with enough protein, as well as appropriate vitamin supplements so that it can grow at a healthy rate.

Brumation is the bearded dragon-equivalent of hibernation. If your bearded dragon goes into brumation too early in its life, it could potentially stunt its overall growth.

If your bearded dragon goes into brumation while it is still an adolescent, contact your vet. They may recommend that you take measures to wake your beardy up.

When more than one bearded dragons are raised together, one will generally grow to be larger than the other. Due to the fact that they will lay on top of each other to compete for basking spaces, one will end up receiving less light than the other, and will therefore be notably smaller. It is a general rule of thumb that bearded dragons should not be raised in the same enclosure, even if they are of the same gender.

See also  Why do Pugs have Short Snouts

Contrary to popular belief, a small enclosure in and of itself will not necessarily stunt your bearded dragon’s growth. If your beardy is suffering from stunted growth, it is most likely due to one of the previously mentioned scenarios, a combination of multiple factors, or due to an underlying condition.

How fast do bearded dragons grow?

Bearded dragons reach sexual maturity between 1 and 2 years of age, and they will generally stop growing anywhere between 11 and 12 months old, although some will continue growing into the second year of life.

For the next 10 to 15 years, they will stay the same size. Much like most other animals, bearded dragons grow very quickly during the first few months.

After rapid growth for the first 3 months, bearded dragons will continue to grow at a much slower rate for the remainder of the first year of life.

Expect your bearded dragon to grow about an inch or so each month following the first three months. After a year of growth, your beardy may continue to grow at a much slower rate: about 1 to 2 inches in the entire second year. After the second year, your beardy will have reached adulthood.

Bearded dragons can be a perfect addition to any family, as they don’t grow up to be too large and are easy to handle. By providing proper care for your bearded dragon in its first few years of life, you will promote proper development that will keep your beardy happy and healthy for years to come!