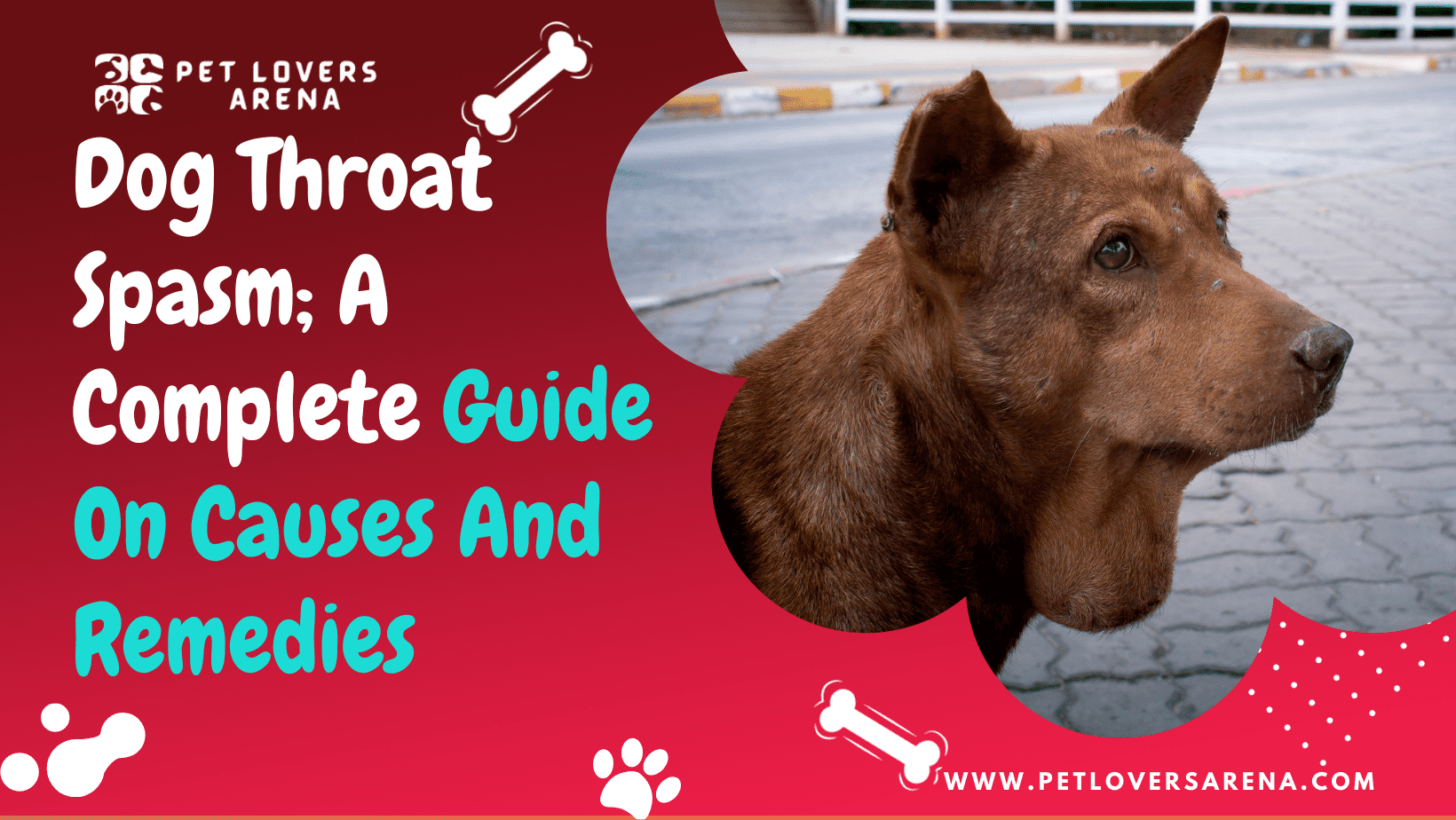 Dog owners are often concerned about their dogs’ throat spasms.

So, what happens in a throat spasm? From a normal condition, you find that your dog suddenly stretches its neck and front paws. Its chest begins to move faster, sometimes at a staggering pace. This is something that will make any dog owner worried and uncomfortable. When it has never happened before, it might be even more frightening.

Thankfully, dog throat spasms aren’t often caused by grave medical problems. Typically, what appears to be a dog throat spasm is actually a case of reverse sneezing. Other times, your dog’s neck may be irritated by anything, leading him to behave as though he is experiencing spasms. Then there are occasions when the dog’s digestive system is malfunctioning. As a result, he acts as though he’s getting spasms.

Dog throat spasms will bring your dog some discomfort, but they will not be harmful in the long run. You shouldn’t be alarmed if your dog has slight or infrequent throat spasms. However, if your dog’s neck spasms become too common, you should consult a veterinarian.

If your dog looks to be in pain while having spasms, you should visit a veterinarian. Vet examination is required if the spasms are coupled with any other symptoms such as persistent coughing.

What can be the probable causes and remedies for these spasms? Keep reading to find out.

What is the Issue with Your Dog’s Throat?

If your dog’s throat is spasming, multiple things could be wrong. It might just be a little discomfort or something complex like your dog’s windpipe/trachea collapsing.

The irritation may be caused by something the dog ate. It might also be related to injury, as apparent spams are one of the most common dog throat injury indications. Something may be lodged in the dog’s throat. Foreign items stuck in the throat might produce symptoms of throat spasms in dogs.

Causes of Dog Throat Spasms and their Remedies

We have compiled the list of causes and symptoms along with their remedies. Now, if you ever see your dog going through any throat spasm, you can immediately adopt any of these remedies as first aid.

Reverse sneezing is the most common cause of actual throat spasms in dogs. A short movement occurs at the junction of the dog’s neck and mouth. The windpipe constricts temporarily as a result of this action, making breathing difficult. During that brief moment, the fight to inhale emerges as a full throat spasm.

Reverse sneezing in dogs is produced by a muscular spasm at the rear of the mouth, where it joins the throat. The medical term for this is paroxysmal inspiratory respiration. This spasm produces a temporary restriction of the trachea opening, making it harder for the dog to breathe.

Are there any more reasons for a dog’s reverse sneezing? Everything which irritates the throat and causes it to spasm, such as:

The spasms are typically relieved if you can get your dog to swallow. There are three ways to induce a swallow.

Your dog may take some time to completely recover, but these methods normally work. If the event does not end between 30 seconds to a minute, it is likely to be more severe and thus should be treated by a veterinarian.

Acid reflux occurs when the acid of a dog’s stomach moves upwards towards the esophagus. When the sphincter between the esophagus and stomach opens, allowing backflow of gastrointestinal contents, such as food or merely yellow bile, this occurs. The esophagus is irritated by stomach contents, causing lip licking, burping, or even puking.

See also  How Much Should A Chihuahua Eat?

Here are some symptoms of acid reflux in dogs:

The most common therapy is to give your pet multiple small meals of readily digested food throughout the day, such as simple rice with boiled chicken and blanched vegetables. If kibble is fed dry, it can cause acid reflux, so making a cereal out of it by adding a cup of water or broth will assist, but if the problem persists, transitioning to more hydrating foods like chicken and vegetables can help.

Severe hernias or ulcers may necessitate surgical intervention in rare circumstances. This will vary depending on the underlying disease and the intensity of the symptoms. The operation may be performed endoscopically, which is less intrusive and typically results in a quick recovery. Biopsies and tests should be performed on any abnormal growths.

Then there are occasions when a dog’s throat spasms are induced by throat irritation. The discomfort might be physical, such as from something trapped in the throat. It might also be chemical in nature, such as a reaction to an allergy the dog has been subjected to.

It is advisable to avoid using leashes that are too tight. This is because an excessively tight leash can produce reverse sneezing in dogs and the signs of throat spasms.

When you’re with your dog, stay away from strong fragrances and other allergens.

Try everything you can to prevent your dog from harming his throat. Items that might damage their throat should be kept away from them.

Try to keep mites under control, as they can cause discomfort and, as a result, spasms in dogs.

The trachea is the tube-like structure that links the neck to the lungs. This tube is generally referred to as the windpipe, and it is surrounded by cartilage rings.

In dogs, however, the cartilage does not entirely encircle the trachea, leaving a tiny piece of it protected merely by a thin membrane.

When your dog breathes air into the lungs, the membrane and tracheal rings may lose stiffness and strength, causing them to collapse.

Trauma or a tight leash can cause this, but it could also occur inadvertently, especially in elderly dogs. Tracheal collapse may affect dogs of any breed, but because it is more common in certain breeds, it is hypothesized that there is a hereditary aspect at play. A dry cough is the most common sign of collapsing trachea, and it can last all night, mainly after feeding, drinking, having to wear a leash, or being outside in humid climates.

Cough can be a sign of various medical disorders. Thus a thorough examination is required for a good diagnosis.

In most cases, radiography or endoscopy are needed to prove a diagnosis of collapsing trachea in dogs.

Even though your dog may continue to endure throat spasms and coughing, a collapsing trachea does not necessarily require treatment. With proper control and preventative measures, your dog can enjoy a normal life with little to no complications.

Your dog must maintain a healthy weight and lifestyle to keep this illness from aggravating. Overweight dogs may potentially worsen the collapse of their trachea. Avoid feeding your dog fatty meals that are high in oils and butter.

Surgery can be an option to repair a collapsing trachea, but it is an extremely complicated treatment that is not suggested until absolutely necessary.

It occurs when the heart cannot pump adequate blood to all the organs.

Congestive heart failure in dogs can be diagnosed by pale gums, fluctuations in blood pressure, and breathing difficulty.

In certain circumstances, such as heartworm disease-induced congestive heart failure, treating the underlying ailment may relieve part or all of the cardiac difficulties. Surgical correction may be possible if the issue is caused by a congenital ailment (a cardiac abnormality that the dog has had since birth). The condition is untreatable in most situations. However, therapy can help enhance the length and quality of life of dogs.

Almost all dogs with this condition will require medication for the remainder of their lives. To track therapy effectiveness and disease progression, lab tests, radiography, and echocardiography are regularly required.

You May Also Read: Can Dogs Eat Mochi?

The majority of the time, dog throat spasms are not a reason for concern. Unless they happen too often, are too severe, or are coupled with other troubling symptoms.

Even if the cause of a dog’s throat spasms is a significant underlying medical problem, they are usually curable. Sometimes, all that is required is to give the dog a few simple medicines.

Some dog throat issues are symptoms of serious illnesses, but most of the time, they’re only transitory pain that subsides before you can get to the nearby hospital. So, just be attentive to the causes, and the spasms will go in no time.