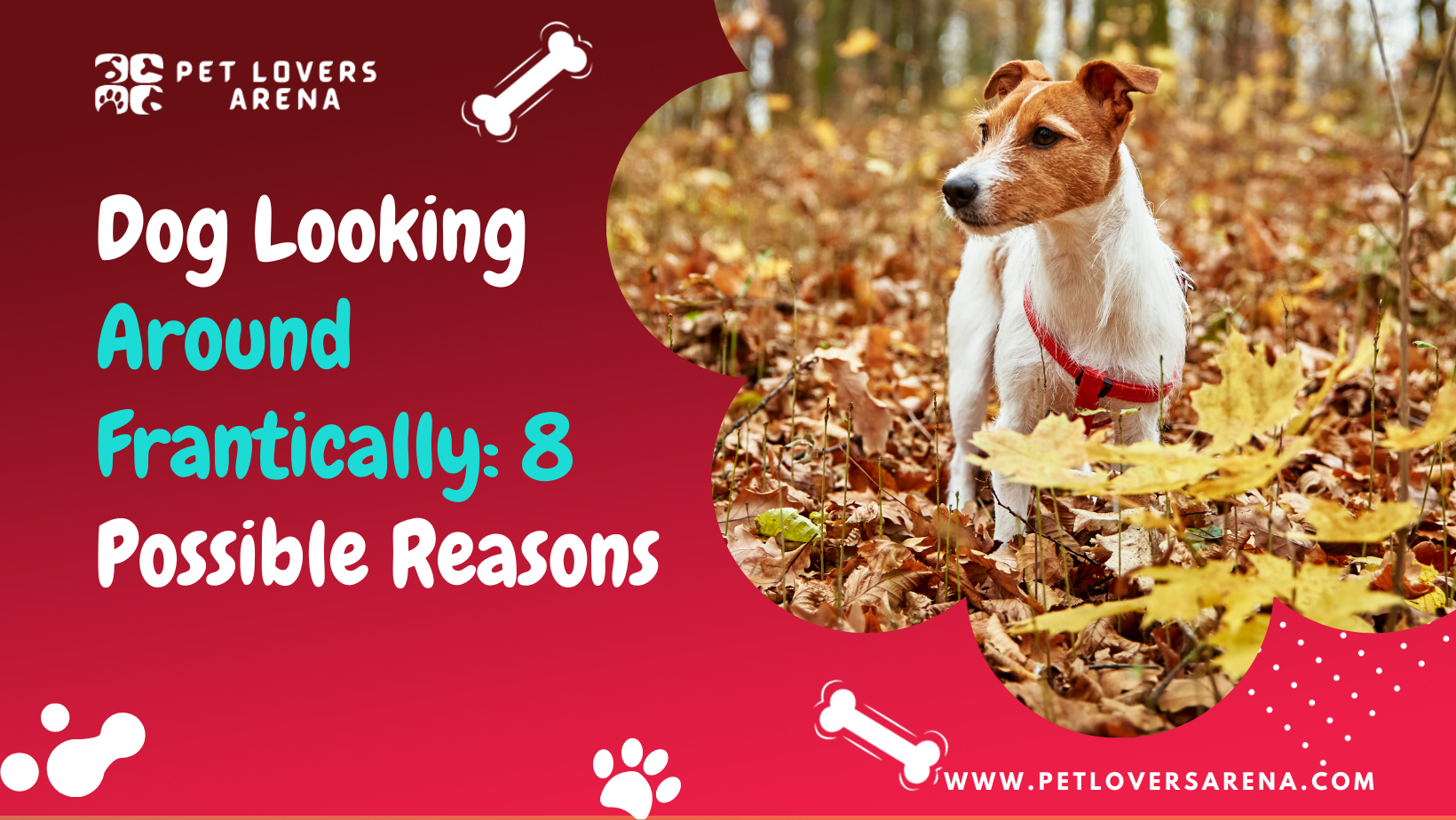 In general, unusual actions in dogs are pretty frequent and even expected. But what if your dog is pacing around in the home and looks around furiously for no obvious reason? Is there any significance to this?

There are a variety of reasons why your dog keeps glancing around the area, even though there appears to be nothing around. They can range from common causes like age and having heard something to more serious ones like delusion, fright, and fly-snapping syndrome.

If all these developments are new, you should act quickly since they might signify something more serious.

Except if your dog is sensing anything, is getting older, or you can remove the stimuli that cause this behavior and seek advice from a veterinarian.

You must pay attention and keep track of the time, date, and general overview of the situation in which the dog acted unusually. This will assist you and your veterinarian in determining a possible explanation for your dog’s frenzied looking around.

8 Reasons Your Dog is Behaving Oddly and Looking Around

If there’s one thing you should know about dogs, it’s that their behavior is typically constant. Canines, like people, have regular habits and prefer to keep to them. You have every reason to be worried if you detect any changes in your puppy’s regular behavioral patterns.

For example, if your normally calm and collected dog starts becoming neurotic and fidgety during the day, there might be a number of reasons for this newfound behavior.

Physical, mental, and behavioral changes occur in dogs as they age, just as they do in humans. For example, canine cognitive dysfunction, often known as dog dementia, can cause your dog to behave strangely, such as looking around wildly.

Mood swings, incontinence, difficulty in identifying people or locations, and increased separation anxiety indicate dementia. In addition, strange habits, such as an unexpected floor-licking habit, may appear in your dog.

Regularly exercising and playing with your dog to give mental stimulation would be beneficial in instances like these. While no particular therapy is now available, you may be able to slow down the cognitive and physical decline. You may also utilize activities and treat-dispensing bowls to help them engage their minds.

You might want to take your senior dog to the vet to understand how to manage this unexpected shift in behavior and lifestyle. Because some dogs have a shorter lifetime than others and hence age faster, they may develop this frenetic behavior sooner.

Some dogs are genetically healthier than others and possibly less prone to behavioral changes arising due to health issues.

Your dog’s frenzied looking around may be caused by a condition known as nystagmus. Nystagmus is an unintended eye movement that can be either jerky or sluggish.

See also  Dog Keeps Stretching Neck and Looking Up? 12 Reasons You Should Know

This ailment is common as people become older, but it might also be caused by more serious issues like a head injury or vestibular disorder.

Other signs and symptoms of nystagmus are:

An infection could cause nystagmus in the ears or brain and seizures or epilepsy in rare situations. You should see your veterinarian since the reason will determine the cure. The main factors are mentioned further down.

Your dog may have been struck in the head by a tangible thing. This may have induced nystagmus, impaired coordination, balance, and other signs by disrupting their brain circuits.

In such instances, you must immediately take your dog to the veterinarian for scans and treatment. Otherwise, there may be long-term consequences, including irreparable brain damage, if nothing is done.

You can anticipate pain medicine and other medicinal medications from your veterinarian. In addition, a neurological examination will be performed on your dog to determine the extent of the injury.

Based on the intensity of the damage, recovery might take a lengthy period. Therefore, it would help to confine them to a limited cozy location during this time to minimize their activity.

The vestibular system, which is located in the brain and ear, is responsible for maintaining balance. And this may lead to symptoms such as poor balance and coordination, a tilted head, general disorientation, and nystagmus.

Vestibular illness can be congenital (existing from birth) or idiopathic (developed with age).  It can be identified by looking at your dog’s medical history and other symptoms like nausea or vomiting. This disorder is more common in senior dogs and might be another cause of nystagmus.

Several varieties of the disease can affect any part of the dog’s body, including the ears and the brain stem.

Urine and blood tests and assessments of blood pressure and radiography may be necessary (X-rays). MRI and CT images will be used if there are any tumors or anomalies.

Treatment will be determined by the reason and severity of the condition. For example, when your dog has a significant loss of balance or coordination, sedatives can help them rest; antibiotics can be given for infections. However, if the symptoms worsen, your dog may have to be hospitalized.

Also Read: Why Does My Dog Keep Sitting Down Abruptly? [ 9 Possible Reasons]

The ears of dogs are four generally more sensitive than those of humans. This implies they can pick up noises from a greater distance and at high frequencies than their owners.

See also  Why Does My Dog Scratch the Carpet? (5 Tips Stop This)

Although it may appear alarming that your dog began gazing and moving around anxiously, it is possible that they are attempting to locate and comprehend the source of an unusual sound.

You don’t have to be concerned in this instance; simply join in on the investigation to discover what that unusual sound is!

Your dog might be hallucinating owing to the Fly-Snapping Syndrome, convulsions or seizures (discussed below), or other medical conditions as they gaze about furiously.

If you believe your dog is experiencing hallucinations, you should contact your veterinarian right once since it might result from an undiscovered medical problem.

Fly-Snapping or Fly-Biting Syndrome is a rather uncommon dog ailment.

This condition may be present if your dog is gazing about anxiously and suddenly bites at apparently nothing in the air. Your dog may also look into space before snapping in the air. These episodes might be unexpected, infrequent, or ongoing.

There are various theories on what causes Fly-Snapping Syndrome; here are a few of them.

Some vets believe this illness is caused by partial seizures or epilepsy. These epilepsies might be inherited and grow more frequently as people become older.

In this instance, you should seek assistance from your veterinarian. They may prescribe antiepileptic drugs like benzodiazepines to avert recurring epilepsies after reviewing your dog’s medical history and doing a physical examination.

It’s critical to seek care as early as possible since epilepsy in your dog can quickly worsen and spiral out of control. In addition, medication may no longer be able to aid your closest buddy at that moment.

Substances in the Eye

Asteroid Hyalosis is a material found in canine eyes that is similar to vitreous blobs in people. These can occur spontaneously as dogs (and people) age or as a result of eye injury.

The vitreous, a jelly-like fluid that is encased in the center of the eye, is where Asteroid Hyalosis begins. Calcium and phospholipids inside the vitreous bind together as your dog gets older, creating spots in his eyesight.

It’s possible that your dog mistook these patches for flies or anything else irritating. This might clarify why your dog is anxiously glancing about since it could be fascinated or upset by the spots that shift as the dog’s eyes move.

Due to prior encounters of physical assault, in attention or love, or lack of socializing, your companion may gaze frantically and bite in the air. This is especially true if the dog is a rescue dog that is attempting to defend itself.

Make sure to shower your buddy with love and make them feel comfortable wherever they are in these circumstances. It will take a while for your buddy to feel at ease in your presence.

Seizures are singular occurrences in which an involuntary movement occurs as a result of momentary aberrant brain function. A sequence of seizures characterizes epilepsy. Idiopathic seizures are episodes that occur without warning and have no recognized cause in dogs.

If your dog exhibits frantic behavior only once, they have likely had a seizure, and its behavior and brain function will quickly return to normal. However, if their conduct does not improve or escalates, you should immediately call your veterinarian.

There might be underlying difficulties that only become apparent as canines age or when they are exposed to a certain trigger.

A brain tumor may be to blame for its convulsions and frenetic behavior in the most extreme situations.

Keep track of the circumstances of this occurrence, such as the time, date, location, and probable stimulus, since this information may aid the veterinarian in determining the best therapy for your dog.

Even while dogs are fearless when battling mice or squirrels, they can nevertheless be scared of some things. The following are some signs that your buddy is afraid:

Your companion may be searching frantically for an exit route or doing it unconsciously as they consider a suitable response.

Fear may be triggered by the sense of being reprimanded for doing something wrong or by specific items, odors, or signs that indicate something awful is about to happen.

Read More: Why Does My Dog Keep Stretching? [7 Reasons]

When their surroundings change, or when a new animal or human enters their area, dogs might get nervous or anxious. You may turn their box into a secure haven for your dog if he or she feels frightened or agitated. Dogs like familiarity and struggle to adapt to changes in their surroundings.

If you’ve recently relocated, you may help him relax by surrounding them with familiar objects, such as their favorite toy. If you’re bringing a new pet into your home, keep an eye on their activities and reward positive behavior until they get along.

If you notice your dog staring around anxiously, jot down the facts of what happened since it will greatly aid in detecting the problem.

Sensing things, nystagmus, delusions, fly biting/snapping syndrome, tension, worry, or panic might all become factors in the behavioral changes. On the other hand, it might possibly be that your dog is simply getting older.

Monitor your dog carefully, and if symptoms persist or worsen, call your veterinarian or a dog therapist as quickly as possible to determine the best course of action.