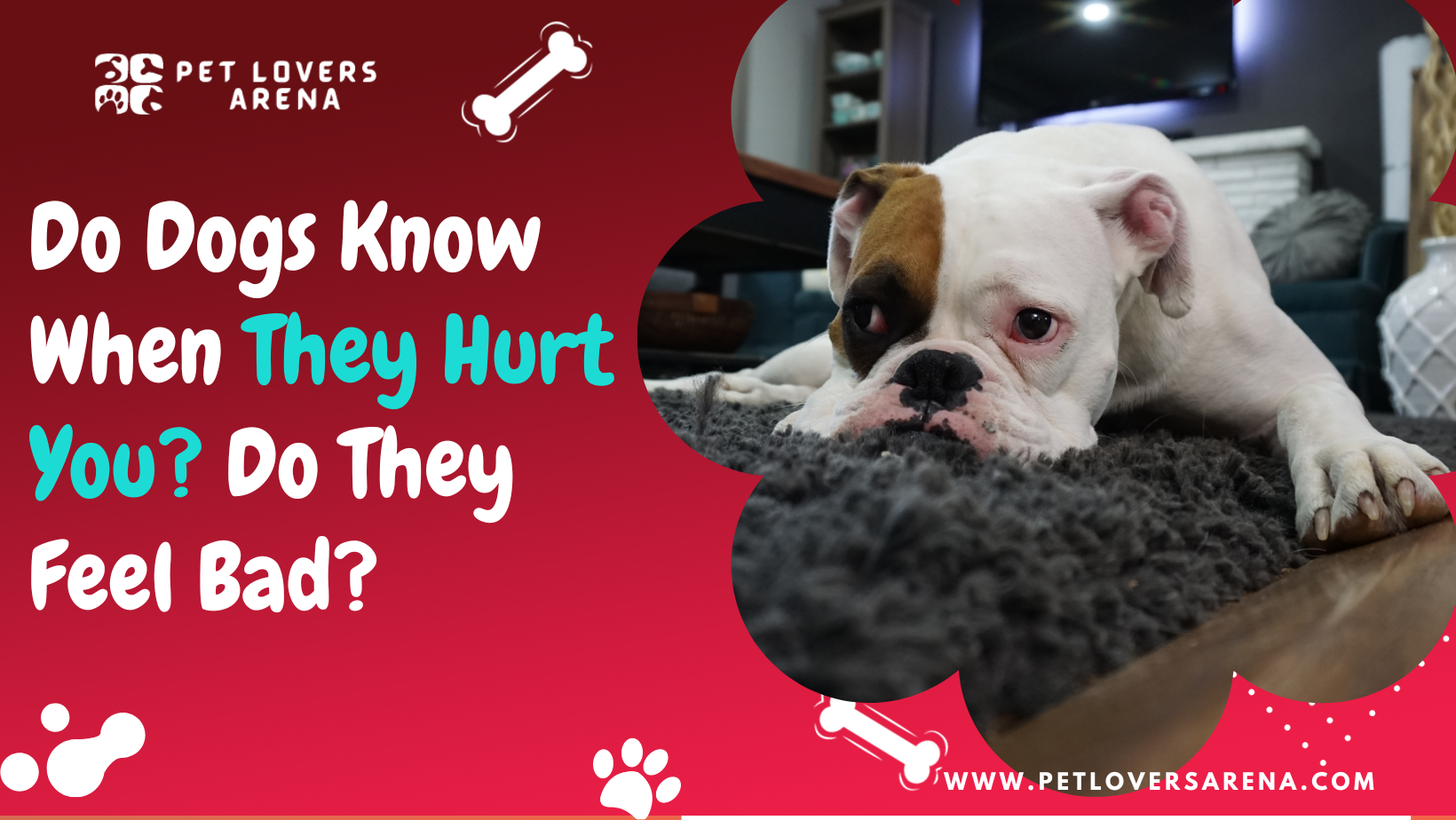 Many dog parents have complained that their pets hurt them, mostly unintentionally, and then go silent for a while. They think dogs realize that they have harmed their owner, making them feel bad.

Dogs are highly intuitive animals, and they can sense human emotions. It is a different thing that they do not have this sense of understanding that they have hurt someone. At some point, a dog would have hurt you, which may have been entirely unintentional.

In case this has happened to you, and you want to understand if they have this realization, watch out for sure signs.

Apart from these, any change in their behavior that is not so normal can be considered a way of understanding something is wrong.

It is their way of expressing their grief at their owner’s pain and being remorseful. However, you must know that the memory span of a dog is deficient. It is as low as 27 seconds, meaning if there is something that has been registered in their minds within this span of a short time, they will react to it.

So, if you want them to know what they have done, ensure to let them know they have hurt you within 27 minutes. We have listed signs or behaviors to help you know, check them out.

How Can Dogs Hurt Their Owners?

We know dogs for their loyalty toward their owners, but let us not forget that they were not meant to be petted. They were meant to be in the wilderness and defend themselves or hunt for their food. So their paws, nails, teeth, and everything is designed to help them protect themselves against other wild animals or find prey.

There are many ways in which dogs can hurt their owners intentionally or unintentionally. In most cases, the degree of the hurt is not too high. However, you must always get in touch with their vet to ensure there is nothing major. Especially if the scratches are too deep or if it bleeds.

See also  How to Get Dogs Unstuck After Mating? [Complete Solution Guide]

Often when dogs get too excited, they tend to pounce on their owners, not realizing that their sharp nails or paws can hurt their owners. It can get hurtful for the owner if they do it multiple times, as that would mean scratching the same area many times.

It is best to stop them in the very beginning, or even better, never make it a habit to let them pounce on you even otherwise. It is essential to let them know what they can do and what they cannot.

If someone said one human being bit another, it would seem scandalous because humans do not do that to each other daily. They might slap, push or hit but in most cases, they bite in extreme instances in which their hands are not functioning correctly.

Dogs explore the world through their mouth, be it a happy occasion or a sad one, and they tend to express it through their mouth. The degree of the bite varies and entirely depends upon their emotion at that particular point. It could be licking their owner, sniffing on them, or, in some cases biting them.

Do Dogs Feel Bad When They Hurt You?

The straight answer to this question is – Yes!

Dogs feel bad when they hurt you. There are many instances where they get so busy with other things, failing to bring themselves to realize that they have hurt you.

Also, as mentioned before, their memory span is as low as 27 seconds. That is barely enough time for a dog to remember what it has done. Dogs do not have this realization of hurting someone or you, which makes them continue to go on with their everyday activities.

Dogs who accidentally hurt you might experience regret and display emotions.

They communicate their feelings to us through body language and facial expressions. They combine their senses to identify the emotional condition of people and focus on their reactions.

In the rest of the cases, they do feel bad. Let us see how you can know that they feel bad for hurting you.

Also Read: Why Does My Dog Avoid Eye Contact?

How Do You Know If Your Dog Feels Bad For Hurting You?

It’s challenging to figure out if they have hurt you or not, but several signals will point out that something has been bothering them. Especially if you reacted to the incident where they hurt you, you would find their behavior change instantly.

See also  How To Deworm a Dog With Tobacco?

1. They Would Try To Lick You

You can try to appease them by letting them know you are okay. This could be a way of them making up for their action and an attempt on their part to help you feel better. However, allowing them some time to register that they have harmed you is equally acceptable.

2. They Will Bring Their Favorite Toy To You

This is another way for them to make you feel better as they do not know anything better. So for them, whatever makes them happy and comfortable should work for you. This could mean they bring their favorite thing (available to them at that point) to you, be it their favorite snack, toy, or clothing.

3. They Will Run And Hide Behind Some Furniture

They might try to escape and find refuge behind some furniture for fear of being reprimanded. It is only natural for them to behave that way, especially if something similar has happened.

4. They May Try To Hide Behind Some Family Member

The idea is that they are fearful, and they might try to find refuge in someone they trust. It could be another family member or a friend. It may not necessarily have to be an attempt to hide from your anger, but it could also be a way of finding some comfort.

5. They Will Stop Playing

If you find them unusually inactive or if they suddenly stop playing with you or anyone else, chances are that they have realized that they have done something wrong. They can go from playing and being happy to instantly going silent.

6. They May Seem Confused

If they appear confused and worried, they probably are trying to figure out what they have done wrong. Perhaps your reaction to their actions confused them, and now they do not know what to do next. You can make eye contact with them and try to point out the place where they hurt you.

This could remind them of what they did.

7. They Will Put Their Tail Between Their Hind Legs

It is a physical manifestation of their mental confusion, where they cannot decide what needs to be done. This is their way of feeling apologetic for their actions.

See also  Can Dogs Eat Boba? Everything You Need to Know

8. They Become Submissive And Roll On Their Backs

This cute position is valid both when they are happy and sad. That is because it is their way of showing emotions to their owners. This could be a way of telling you that they finally submit or are done being too naughty.

How To Ensure That Your Dog Does Not Hurt You Again?

Many factors can ensure your dog does not repeat the same action. First, you can train them to understand the difference between good and bad behavior. The way you react to their actions will show them if what they have done is correct and acceptable or not.

Dogs are loving and caring but don’t have a choice but to show affection through their paws or mouth. Dog parents who have spent a considerable amount of time with dogs are used to being hurt once in a while. However, people who do not know dogs’ ways can get scared of their expression of love.