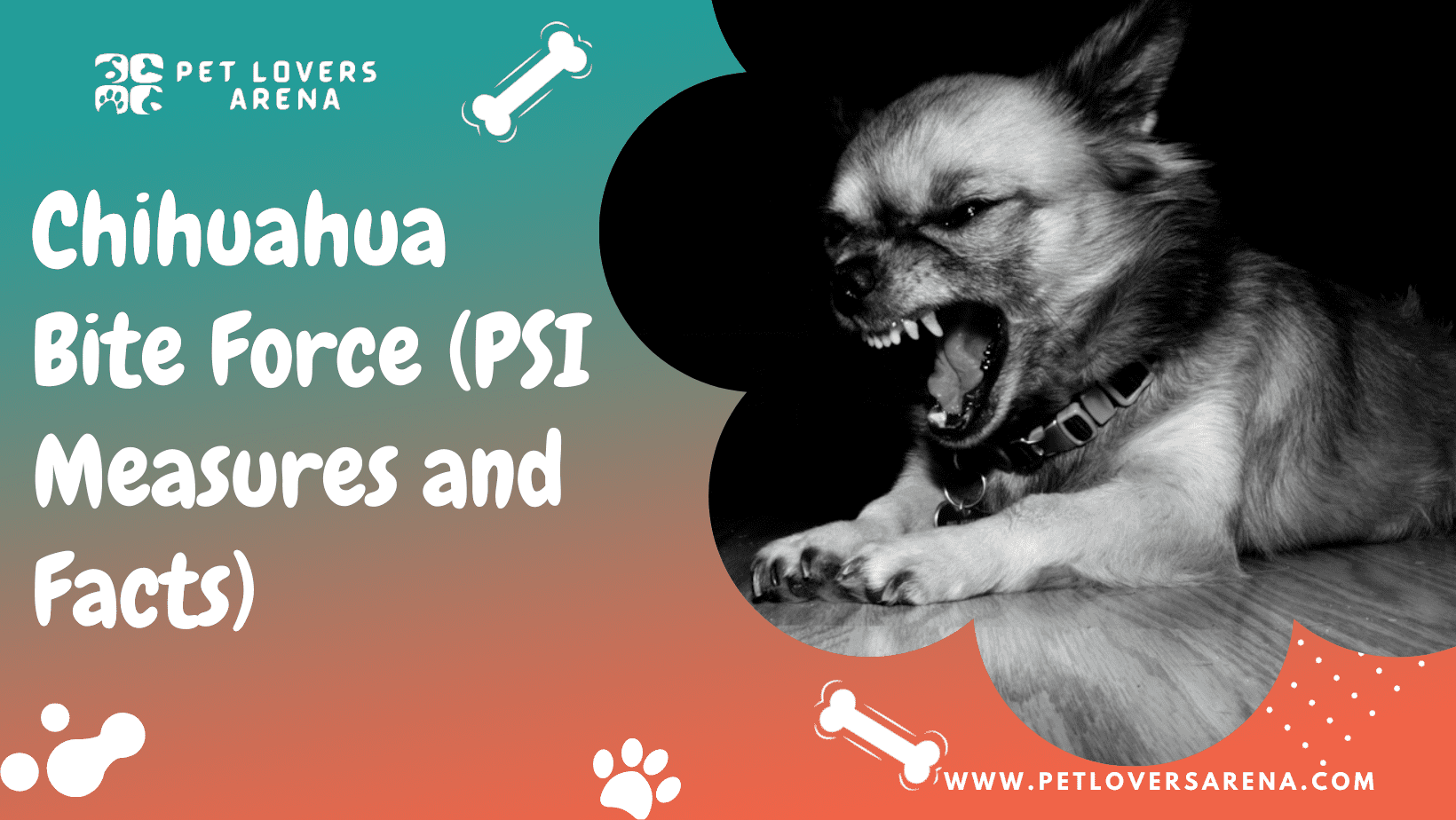 Chihuahuas are not only considered one of the smallest breeds of dog, but they are also one of the most aggressive dogs you will come across. This small, short-haired dog is often feared by many because of its aggressiveness. Although the dogs of this breed are small and lovable, their aggressiveness is what makes them feared by all. Chihuahuas are said to be the sole protectors of their owners.

Many people want to keep chihuahuas as their pets. They often restrict themselves from doing so just because of their nature of getting aggressive, but actually, this nature is the one that is responsible for the owner’s safety. So before going to buy a chihuahua dog, the first question that comes to the mind of the owner is what the actual Chihuahua Bite Force is. Well, let’s discuss the interesting facts about the biting force of the Chihuahua along with it. Let’s counter some myths here.

What is The Strength Of The Chihuahua Bite Force?

Measuring the exact bite force of a chihuahua is quite tricky. There are several different PSI (pounds per square inch) units of Chihuahuas Bite Force available, but the majority of them are just rumors.

Some people around there believe that Chihuahuas have a bite force of nearly 3900 PSI (pounds per square inch), but to prove there isn’t any evidence, nor can it be technically possible, will be explained further in this article. So, considering 3900 PSI to be the bite force power of a Chihuahua is completely baseless and is allegedly a rumor.

3900 Psi Can’t Be Chihuahuas Bite Force, According To Studies

A lot of research done in the past claims Chihuahua bite force to be 3900 PSI (pounds per square inch); considering the dogs’ size, it’s baseless. Along with this, some facts are there that prove the same as the comparison of the Chihuahua bites with those of other animals.

First of all, let’s focus on some past research to prove our point.

In the year 2010, Sir Stanley Coren, a British Columbia University psychology professor, explained in his article on the website Psychology Today that most people measure dogs’ bite force in the wrong way. They tend to mix up units of force, such as Newton and pounds. And this confusion leads to the opposite and unrealistic results.

The bite force of a tiger is 1050 PSI, and for lions, it is approximately 650 PSI, so there is no chance that small dogs such as chihuahuas have a large force like that of 3900 PSI.

As per 2009 research for calculating bite force in animals, it was said that the bite force for any animal would depend upon the size of its skull, jaw, and mouth. The larger heads and wide jaws of animals will produce a large force as compared to animals possessing small heads and narrow jaws.

As per the above mentioned, the largest mouth and widest jaw are those of the mastiff breed, and their PSI (pounds per square inch) has been observed as 552 pounds, which is slightly lower than that of animals like lions (nearly 650 pounds). So, if we consider a small dog like a chihuahua, their bite force cannot exceed 200 PSI because their face and jaw are both tiny and not large enough to exert pressure greater than 200 PSI. Considering 3900 PSI as the bite force of a chihuahua is not possible.

See also  My Dog Killed Possum: Should I be Worried?

On the Psychology Today website, Sir Stanley Coren has said exactly what he said in a blog post.

“The size of the animal and the shape of its jaw predicted bite strength.” The larger the dog and the dog’s head, and the wider the jaw, the higher the bite force turned out to be. The dog breed with the largest head and widest mouth is the Mastiff, so it is perhaps not surprising that it has been recently measured as having a bite strength of 552 pounds—just shy of the bite force that the lion has. This force exceeds that of all breeds measured to date. “

The possible reason why Chihuahua’s Bite Force is considered 3900 PSI can be the misinterpretation of units. It is common for people to confuse Newton with PSI. This confusion can lead to the confusion of considering force to be wrong.

As per the researchers Jennifer Lynn Ellis and DL Lindner, the highest value of force for a dog bite has come so far to be 2,000 Newtons, and maybe from there many people took the information but changed the unit from Newton to PSI. 1 Newton per square meter, on the other hand, is equal to 0.0001450377 pounds per square inch (PSI). So, as per this, the highest biting force for any breed of dog is not 2000 PSI, but it is close to 450 pounds.

Here is what their articles exactly state:

“Two types of research have been carried out to measure the bite forces of dogs. The final results of the research were disclosed in Newtons. This made the highest numbers come out at 2,000 Newtons. And from there, a majority of the websites collected the number and wrongly interpreted it as the PSI. It is, however, 450 pounds per square inch.”

From the above research, we can clearly state that for a chihuahua to have a large biting force is not possible.

Chihuahuas are small yet aggressive dogs. Due to the small size of the body as well as the jaw, they can’t exert a bit of pressure. There is one big difference, though. We can’t make dogs bite until they hit their limit and then record the values.

While some scientists and technologists have recorded the bite force of Chihuahuas and other such dogs, they are for reference only and are approximately close to the exact value, as the actual value of the force can vary.

The biting force of a chihuahua can be considered between 100 and 180 PSI, and a force of more than 200 PSI isn’t possible in their case, considering the size of their face and jaw.

The Biting Force Of Dogs Of Different Breeds

Based on the above-mentioned figures, Kangal dogs can be considered to have the highest biting Force of 743 PSI, which is approximately 300 PSI. It is comparatively less than the bite force of animals like hyenas and tigers with nearly 1000 PSI biting forces.

See also  Why Does My Dog Lick the Couch All the Time? 10 Reason & Solutions

They are followed by American Bandoggers and Cane Corso having a biting force of approximately 700 PSI. Remember, these figures are completely based upon the size of their jaws and not that of their body.

The above-mentioned breeds of dogs are much larger and more powerful as compared to chihuahuas, so there’s no chance that the bite force of a chihuahua is greater than that of any of these dangerous breeds, and that too, by such a large margin.

Why Do Chihuahuas Tend To Bite?

The Chihuahua is considered one of the most aggressive canines. Although they are termed an aggressive breed, they are very lovable and make great protectors of their owners.

Several things could be going on when your dog bites you. One of them could be small dog syndrome, maternal aggression, or even pain-induced aggression.

In Which Areas do Chihuahuas Tend to Bite?

Chihuahuas are small dogs that bite primarily on the hands and legs of a person. However, studies have shown that they are not going to attack your arms or elbows.

Chihuahuas are aggressive and intelligent dogs. Even though their bite doesn’t have much force, the bite power of 100 PSI is going to cause some damage and hurt. But the thing is, they are not dangerous at all.

Studies have proved that chihuahuas are nice, lovable, and protective pet dogs. They may get aggressive, but that’s under certain conditions.

Mostly, those chihuahuas who are stray dogs and are not properly tamed and neutered tend to bite and be aggressive.

Many studies have been conducted to find out about the chihuahua bite force. Let’s take a look at some of them.

In the year 2009, a study was conducted to check ways in which humans and dogs could live safely together.

In the year 2016, a study in which the opinions of nearly 4000 dog owners were collected proved that chihuahua dogs are the most aggressive dogs, and they tend to get aggressive and bite mostly when they are met with a larger dog. This may be due to some inferiority complex in them or just because they want to show their worth.

The Death Rate From Chihuahua Bites

Well, with the assumptions of its biting force, there should be a lot of deaths from Chihuahua’s bites, but there is not, for the obvious reason that the force exerted by their jaws is not that high.

See also  What Do Yorkies Usually Die From? 9 Possible Reasons

With a bite force of 100 PSI, it is sure that they will leave marks wherever they bite, but the bite will not be that dangerous to kill a human unless and until they have bitten the main artery.

But, we believe what the reports and studies say. So here it is.

Only one case has been found between 2005 and 2018, caused by a chihuahua’s bite. Another incident was reported in 2018, but the cause is ambiguous, as two other dog breeds were found at the incident. So, it’s certain that other dogs may have bitten, and Chihuahua has been blamed for the cause of death.

Between 2005 and 2020, only two people have died from chihuahua bites, but the number of people who died from other dogs was much higher.

Is it Safe to Have a Chihuahua As a Pet?

Chihuahuas can prove to be lively and loyal pets. If you talk about aggression, then it only gets aggressive when the conditions are not favorable, or they see a larger dog.

If you want to have a chihuahua as a pet, then it is a food choice. You just need to train your Chihuahua, and it won’t be as aggressive as people say.

How To Train a Chihuahua to Not Be Aggressive?

Is it Right to Compare Chihuahuas With Other Dangerous Dogs?

Well, if we compare chihuahuas with other dangerous dogs like pit bulls and German shepherds, it doesn’t make any sense.

Pit bulls, German shepherds, and other such dangerous dogs possess large bodies and mouths, resulting in more biting force than a chihuahua. So, it is not at all valid to compare chihuahuas with other dangerous dogs.

And if we compare the temperament of Chihuahuas with other dogs, such as pit bulls, then the latter have a much better temperament. Chihuahuas are more aggressive and tend to bite more than others.

No doubt, chihuahuas are aggressive, but the biting power of chihuahuas is nothing compared to other dangerous breeds of dogs. Their bite can kill a person, but not that of a chihuahua.

Chihuahuas bite only when they face danger to themselves or their owner, so if you see a chihuahua, don’t start running away from them.

Chihuahuas have strong yet small teeth, so they may bite you and cause you some weird marks, but there is no chance that you will die just due to their single bite.

There are rumors around Chihuahuas that Bite Force is nearly 3900 PSI, but that’s not true. You can’t compare a small-sized dog like a chihuahua with large-sized pit bulls, German shepherds, and other dangerous dogs.

You can consider getting a chihuahua, but keep in mind that you are ready to give him a lot of attention and be ready to spend time on his proper care.