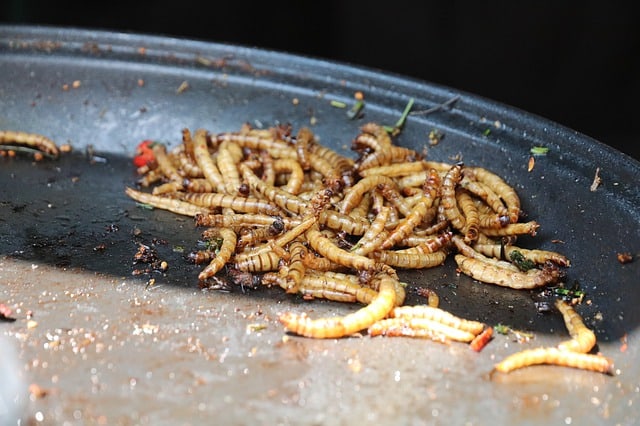 Feeding your Bearded Dragon may seem overwhelming. After all, you don’t just run to the store and pick up
a bag of bearded dragon food like with other pets.

Fact is, bearded dragons can eat beetles, but they really aren’t the best choice for quite a few reasons. Even as worms, before transforming into beetles, the nutritional content is not there to sustain your beardie.

If you plan to feed your beardie beetles at all, mealworm beetles are most recommended. They are high in protein and low in fat, with just one slight problem. Bearded dragons don’t seem to like them so much.

Seems these beetles have a taste that beardies don’t care for, and your bearded dragon will probably turn their nose up at these beetles if offered anyhow.

That is not the case, however, when in their larval form. Mealworms are irresistible to bearded dragons. So irresistible, in fact, they can become addicted to mealworms and refuse to eat anything else.

Being high in fat and very low in protein, mealworms aren’t recommended for healthy bearded dragons at all. Especially juveniles because they can’t handle their tough exterior.

They also cause your beardie to be overweight and undernourished. I would advise staying away from mealworms, except for an occasional treat for your bearded dragon.

Darkling beetles are not harmful to bearded dragons, but with limited nutritional content, they definitely shouldn’t be a primary food source.

Obesity is one of the biggest issues in captive lizards of any kind. Same story with superworms, the darkling beetle in its larval stage.

They have the same high fat content and low protein content, but also have high phosphorous levels with low calcium levels. To remain a safe food, a ratio of at least 2:1 in favor of calcium needs to be present.

That is not phosphorous to calcium ratio seen in mealworms or super worms. Plus, super worms will literally fight you and your bearded dragon.

Unlike mealworms, superworms can bite, and have a stinger on their back similar to that of a scorpion. Harmless, but known to be aggressive, handle them with care and avoid feeding to baby beardies.

Juvenile bearded dragons, who have some experience hunting their prey, and adults should be fine but I would recommend supervising.

Now that we have answered the question, can bearded dragons eat beetles, and addressed why they are not the primary choice; lets look at some other choices.

As far as insects go, they are not all created equal. Choices like Dubia roaches, crickets, earthworms, and ants are more nutritional insect choices for your bearded dragon than beetles.

But when it comes down to it, bearded dragons are omnivores, meaning both plant-based and animal-based foods (including insects) should be a part of their diet.

Young bearded dragons are primarily carnivorous, while older beardies tend to be more herbivores. To give your bearded dragon a balanced diet, feeding a wide and healthy variety of foods is key.

This includes insects and plants, along with fruits and vegetables. Beetles are not the best choice for bearded dragons of any age because they are hard to digest and offer very little in the way of nutritional content. A much easier to digest choice, which is high in protein and perfect for your bearded dragon, is Dubia roaches.

These insects give the same hunting potential and satisfying crunch, but have a much higher protein content and are easier on your dragon’s gut.

Long story short, bearded dragons can eat beetles. They are perfectly capable and no harm will come from eating beetles. But, overall, a diet of beetles is not healthy for a bearded dragon and they should only be fed sparingly, if at all.